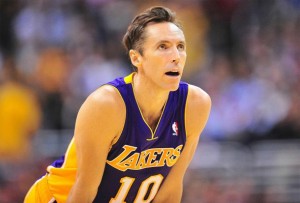 So much has happened with the Lakers so far this season that you sometimes forget all about Steve Nash, who has barely played this year before going out with a leg injury. But Nash may be pretty close to returning. He may be back this Saturday vs. Golden State which will finally give us a look at the full Lakers squad:

Steve Nash is eyeing a return to the Los Angeles Lakers’ lineup Saturday against the Golden State Warriors if practice goes well this week, sources said. Nash, 38, had a light practice workload Monday. He has missed 23 games this season after suffering a fractured left fibula on Nov. 1 against the Portland Trail Blazers. The Lakers might have three days’ worth of workouts in between Tuesday’s game against the Charlotte Bobcats and Saturday against the Warriors.