admin October 5, 2010 Blogs 1 Comment on Ten Most Compelling Games in the First Month of the 2010 NBA Season 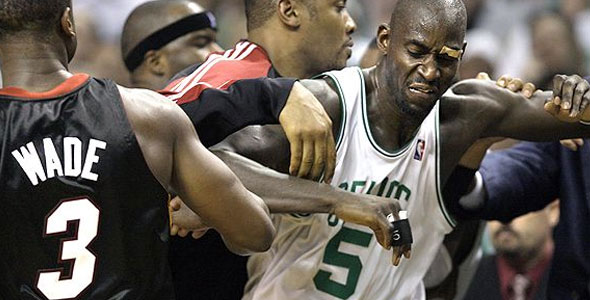 This one does not warrant an explanation. You have Wade, Bosh and James playing their first regular season game together against the reigning Eastern Conference champions. Not to mention, the storyline of the original big three (Garnett, Pierce, and Allen) versus the new big three (James, Wade, Bosh) and you have a great game to kick off the 2010-2011 season.

It will be ring night for the defending, back-to-back NBA champions. After receiving their hardware from their championship last season, the Lakers will begin their title defense against Yao Ming and the Houston Rockets. Yao will be making his return, after missing all of last year with a broken foot. Steve Blake and Matt Barnes make their regular season debuts with the Lakers.

This could be the start of a sunshine state rivalry. Even though the Magic are coming off a 59 win season and are only 16 months removed from an NBA finals appearance, they are suddenly the red headed, Floridian, stepchild since Lebron decided to take his talents to South Beach. Combine this with Miami President Pat Riley exchanging barbs with Orlando coach Stan Van Gundy and General Manager Otis Smith in the off season and you have a great interstate rivalry in the making.

This one is a rematch of last year’s Western Conference Finals. There have been contrasting predictions for this year’s Phoenix team. I have heard some predict they are lottery bound with the loss of Amar’e Stoudemire while others have predicted them to be a 50 win team with the acquisitions of Hedo Turkoglu and Josh Childress. Going against the defending world champions will be a good, early measuring stick game for the new look Suns.

While neither team figures to be in the playoff picture, it is the first regular season match up between John Wall and Evan Turner. The first and second overall picks in last June’s draft, respectively.

For the first time in over a decade, the Bulls and Knicks are simultaneously relevant again in the playoff picture. It is hard to believe these two franchises have not been in the same postseason since the 97-98 season. With the off season signing of Amar’e Stoudemire, the Knicks should make the playoffs for the first time since the 03-04 season. The Bulls have aspirations of being a top team in the Eastern Conference. They have perennial all stars on the perimeter with Derrick Rose, and on the post with Joakim Noah, and Carlos Boozer. While this match up wont be as exciting as it was during the Jordan and Ewing days, at least it is worth watching again.

Garnett, Pierce, Allen, and company invade the house of Durantula for the first and only time all season, barring a finals match up. One team is loaded with veteran superstars, while the other is loaded with young superstars. This should make for a very fun game.

Last year, before George Karl had to leave the team for cancer treatment, Denver was considered to be a serious threat to the Lakers for the Western Conference Championship. They gave the Lakers a competitive Western Conference Finals in 2009 and won two of the first three meetings last year, before Karl was sidelined. Much like Phoenix in the October 29th match up with the Lakers, this will be a good measuring stick for the Nuggets.

For a few days at the end of September, it looked like Carmelo would be traded to the Nets. While all of the trade rumors fell by the wayside, it will be fun for fans of both teams to imagine what could have been and what might be.

If your looking to recover from the pumpkin pie and turkey the day before, how about a lone star state showdown? In my opinion, this is the most underrated rivalry in the NBA. The teams have faced each other the last two years in the playoffs, and who can forget the epic 2006 seven game series? Not to mention, with Dirk and Duncan getting up in age the number of compelling match ups between these two teams may be numbered.