NCAA Top 5 Dunks of The Week 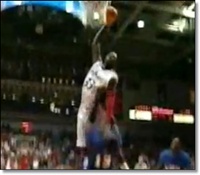 While it’s been tough to find quality NCAA dunk footage recently, I’ve managed to put together yet another Top 5 Dunks of the Week in college basketball. While the list may expand a little past the one week mark, these rim rockers will definitely keep you entertained.

In our last Top 5, we saw dunks by some of the NCAA’s less heralded jammers like BC’s BJ Raji and Virginia’s Mustapha Farrakhan. This time around our list is taken up my some of the best players in the country like Kentucky’s John Wall, who gets revenge on Georgia’s Travis Leslie for posterizing DeMarcus Cousins, back in January, and Ohio State’s Evan Turner, who pulls off a 360 against WVU.

#1 – Cinncinnati Freshman Lance Stevenson Going Up the Ladder vs DePaul