MJ vs. Kobe vs. Lebron 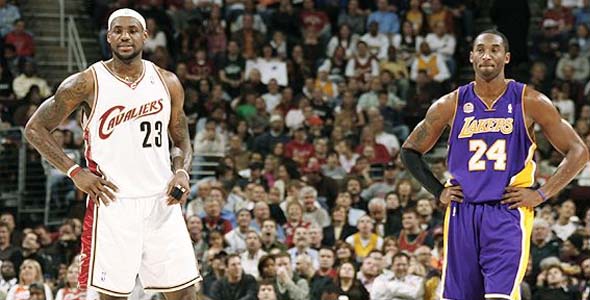 It is a shame that today’s younger generation will grow up not having seen the G.O.A.T, Michael Jordan play, and thinking that Lebron or Kobe are the greatest players of All Time. I read recently that in a poll given to young adults in college, when asked to name the Greatest NBA Player of All Time, 78% responded either Lebron James or Kobe Bryant.Even if Kobe plays into his late 30’s and wins another two titles to equal Mike’s six, he still cannot match the sheer amazing competitiveness and absolute astronomical numbers that “His Airness” compiled. Lebron, who has had one of the best starts of any player in NBA history so far in terms of stats, really needs to get going on the championship front since he is still at zero when it comes to winning.

Now before I get piledriven for being a MJ fan and a Kobe and Lebron hater, let me just say that the numbers don’t lie. I am a big fan of both current players since I am a huge basketball superfan and admire and respect their talents while watching them on the tube or in person. I get it, Kobe and Lebron are the two most dynamic players of the current generation, but while they are phenominal players, they’re not in the same league as MJ, Wilt, or Kareem.

With Jordan’s upcoming induction into the Naismith Basketball Hall of Fame, I decided to compare two players who are widely regarded as the the best current players in the game, James’ and Bryant’s careers, to MJ’s at the same stages.

Lebron does have an edge in Rebounding Average(7.0 to 5.9), Assists per Game(6.7 to 5.7) and 3PT%(.328 to .218), as well as making it to the Finals once but Jordan was better overall by leading in most categories. He scored more than 1000 points more than Lebron in barely more than 5 seasons since Jordan played in only 18 games plus the playoffs in his second season(’85-’86), due to injury. While Lebron proves to be a better rebounder and distributor through 6 seasons, Jordan had better individual seasons in each category by averaging 8 rebounds and 8 assists during the ’88-’89 season, which James hasn’t done to this point. Jordan had a higher scoring average in 4 of his first 6 seasons than Lebron’s highest single season best scoring average(30.0 in ’07-’08), while Jordan topped out at an amazing 37.1 ppg in year 3. One distinct edge for James is in the 3 PT shooting category. Jordan didn’t shoot over .200% until his 5th season and wasn’t a part of his game until later, while the trifecta was obviously in James’ arsenal from the beginning by shooting over .300% in 5 of 6 seasons. One other side note to consider is that during Jordan’s first 6 seasons, he put up his numbers against players were All-Time greats and Hall of Famers in Magic Johnson, Larry Bird, Patrick Ewing, Hakeem Olajuwon, Charles Barkley, and Isaiah Thomas. In my opinion, Jordan would have won more MVP Awards if he had played in a different era, especially in today’s NBA where defense seems to be a lost art.

Although this was discussed previously on this site in our Nextology of MJ Series(http://thehoopdoctors.com/2009/03/the-nextology-of-michael-jordan-part-viii-kobe-bryant/), the numbers prove that while Kobe is probably the player of the 2000’s, MJ is superior in almost every category. While Jordan put up tons of shots from day 1 in Chicago, Kobe was brought along more slowly as he didn’t average more than 20 ppg until his 4th season. This accounts for MJ scoring more than 5,000 more points during these 13 seasons. Kobe also had another superstar in Shaquille O’Neal, who was challenging for scoring titles and MVP Awards, to play alongside and take some pressure off of winning a title, and being the man in LA. Case in point that Shaq won 3 Finals MVP’s during their 3 peat in the early 2000’s, and Kobe finally won his Finals MVP last season, without Shaq. Even though Kobe and Jordan both appeared on the NBA All Defensive Team, MJ topped him by winning the Defensive POY Award in 1988. The most glaring difference between the two comes in Scoring Titles (where Jordan’s 10 blow away Kobe’s 2) and MVP Awards(Jordan 5 to Kobe’s 1). Also while both players have proven to be winners be totaling 10 NBA Titles between them, Jordan was probably the best postseason performer of All-Time by averaging over 33 ppg, which is more than 8 ppg higher than Bryant.

I know that I am probably biased because I have seen virtually every Chicago Bulls game during his playing days, but to me, it is no contest, that MJ deserves to be declared at least the better player in a comparison with today’s top stars.