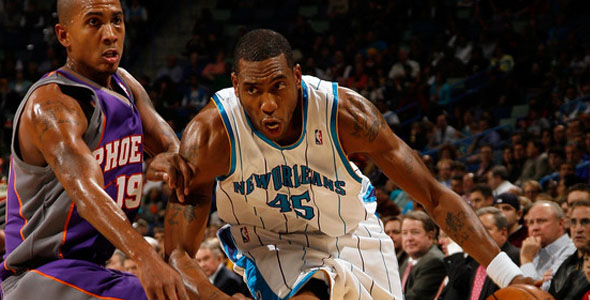 The Miami Heat were cruising to a last minute fourth quarter victory tonight against the New Orleans Hornets. Up by four points with less than a minute left, it seemed Dwyane Wade and the Heat had the game under complete control. Then as expected Chris Paul scored to put the Hornets back within two points with only 20 seconds remaining. But then the Hornets were forced to foul Wade and put him on the free throw line, once again establishing the Heat’s control of the game. Mainly because Wade is an excellent free throw shooter, especially in the clutch moments of a game.

But he missed the first freebie. So that set the stage for the Hornets to attempt some last second heroics with less than ten seconds remaining in the game. To no surprise the Hornets gave the ball to their point guard Chris Paul, but he fumbled the ball and it coughed up loosely just outside the three point line. In comes the Hornets Rasual Butler (the former Miami Heat player) who secured the ball and tossed up a wild off balance three pointer……CASH! No rim, whatsoever. If you missed the game, check out the impressive replay. Hornets went on to win in overtime: