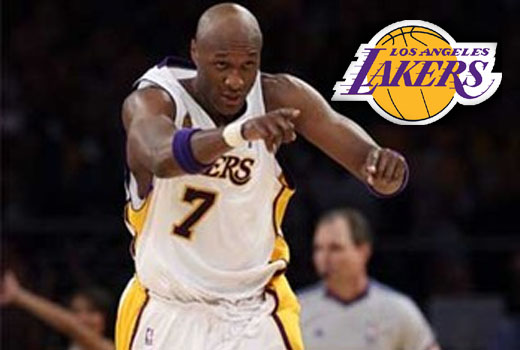 There has been a lot of media attention swirling in the last couple of weeks about the rehabilitation progress of the Lakers young center and rising star, Andrew Bynum. And while it is widely accepted that Bynum is the Lakers center of the future, quite a few questions remain concerning the Lakers roster.

Specifically for me, the question that keeps arising is ‘What about Lamar Odom?’

After Andrew Bynum went down with his knee injury last season the Lakers fans felt like their resurgence in the West was in serious jeopardy. That was until GM Mitch Kupchak successfully closed out one of the most lop-sided mid-season NBA trades in recent history, that brought them the dynamic power forward/center Pau Gasol from the Memphis Grizzlies. The transition was seamless for the Lakers as Pau Gasol is extremely long and athletic and filled the void at center quite nicely. Although the skill set of Gasol seems to be a more natural fit for a power forward given his polished finesse game, his height and size make him an equally suitable starting center in the NBA.

So how does this affect Lamar Odom?

Heading into this season the Lakers are going to have to make a big decision regarding their starting line-up for the center and power forward spots among the three suitable candidates – Pau Gasol, Andrew Bynum, and Lamar Odom. Most likely the starting nods will go to Bynum at Center, and Gasol at power forward. Personally, I think the Lakers have three options given the fact they are leaning towards playing Bynum and Gasol side-by-side as much as possible.

Move Lamar Odom to the 3 spot?

There has been some talk of possibly sliding Odom to the small forward position given his above average ball handling and passing game for a player of his size. But the problem is that will take away his biggest strengths which historically has been overmatching the other power forwards with his quick first step, ability to step out of the paint and consistently hit an outside shot on larger defenders who like to stay at home on defense, and passing out of the post. The defensive-minded small forwards in the league will be used to guarding quicker forwards who can hit an outside shot. At the 3-spot, Odom may end up being a less effective passer than a Luke Walton, and certainly a less dangerous perimeter threat than Vladimir Radmanovic. Odom may have the size and strength advantage to back his defender down, but he certainly would be the most effective for the Lakers at the power forward position instead.

Bring Odom in off the bench? 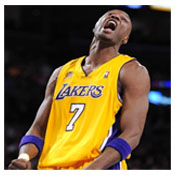 The Lakers may try bringing Odom off of the bench at the 3, 4, and 5 position to try and give him as much court time as possible, and take advantage of his dynamic skill set. Having a player of Odom’s caliber and talent come off the bench would be a luxury that virtually any head coach in the league would love to have. Just ask Gregg Popovich in San Antonio how nice it is to have a player like Manu Ginobili come off the bench and change the pace of the game at will. The problem the Lakers might have, is they have no idea how Odom would respond to coming off the bench. Some players like Manu Ginobili are not affected by the title of “6th man” vs. “starter”, and don’t seem to be bothered by starting the game from the sidelines. I would remind readers though that this is the exception not the norm. In most cases if a player knows he is good enough to be a starter on most teams in the NBA, he will psychologically have a hard time getting up the same for a game coming off the bench as he does starting. Sure, it seems silly. But it doesn’t change the fact.

The Lakers could always trade Odom before the season starts while many teams are still tinkering with their roster before training camp. However, Mitch Kupchak certainly would not be open to trading Odom to one of the Lakers Western Conference competitors as the West is already a massive log-jam of talent where every slight roster move could vault a team from outside the playoff picture, to the elite in the conference.

With that said, the Lakers may even open the season with an Odom trade in mind, then showcase him at the power forward position for a month or two and try to move him while his value is high. Again, I would assume that any Eastern Conference teams not named the Celtics would suffice as an acceptable destination.

Ah well, at the end of the day we will all have to wait and see what Mitch Kupchak and Head Coach Phil Jackson will do with the Lamar Odom card. But regardless of what decision the Lakers make, having too many bigs the caliber of Lamar Odom, Pau Gasol, and Andrew Bynum is a problem that any NBA team would love to have.

What do you think the Lakers should do with Lamar Odom?