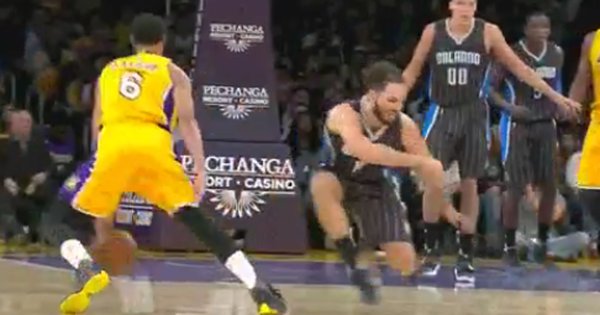 The Lakers young back court of Jordan Clarkson and D’Angelo Russell have been playing pretty well as of late and the Lakers won their second consecutive game Tuesday night, taking down the Orlando Magic 107-98 in Los Angeles.

Although the game featured plenty of highlights, including some sharp shooting from the Lakers and this windmill dunk by the most entertaining non-superstar in the league in Aaron Gordon…

The play of the game may still have been when Jordan Clarkson had Evan Fournier doing the stanky leg in the 2nd quarter and followed it up with a deep three.

The crossover was so nice Lakers rookie Larry Nance Jr. literally didn’t know what to do with himself…

Unfortunately Evan’s going to have to hear about this one from his teammates for quite some time.