admin March 20, 2018 Offbeat No Comments on Is Something in Cleveland’s Water? Jordan Clarkson Believes Dinosaurs Were Pets of ‘Bigger People’ 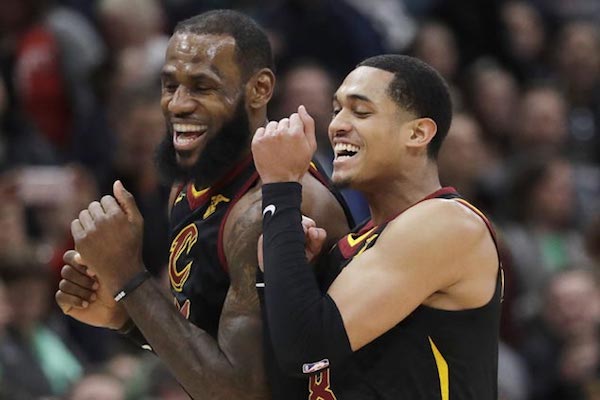 Is believing in something ostensibly ridiculous a prerequisite of being a guard for the Cleveland Cavaliers or what?

First, we had Kyrie Irving divulging that he thinks the Earth is flat last season. Now, we have Jordan Clarkson explaining how he believes dinosaurs were actually the pets of really, really big people. Seriously.

Ryne Nelson of SLAM Online passed along comments the guard made during a recent appearance on  Road Trippin’: Richard vs Channing podcast:

“Clarkson: ‘Y’all know how we got dogs and stuff right? So, I think it was bigger people in the world before us, and the dinosaurs was they pets.’

“DJ Montage: ‘How big were these people?’

“Clarkson: ‘Oh, you look at a dinosaur. They got to be three times bigger than them.'”

I kind of respect Clarkson for admitting this. It’s definitely absurd, but I admire his willingness to go against the grain.

Just for kicks, though, let’s entertain his premise. The tallest dinosaur, per a quick Google search, was the  Sauroposeidon, clocking in at 18.5 meters—or 60.69 feet. So if their owners were supposed three times as tall, that would make whatever beings walked the Earth at the time roughly 183 feet tall. That’s….really big. Like, larger-than-mythical giants big.

Maybe that’s what Clarkson believes—that Autobots and Decepticons roamed the planet and kept dinosaurs as pets. I honestly don’t know. I sure as hell don’t agree with him. I also don’t think he’s drinking or smoking any kind of special sauce. This seems to be just one of those weird quirks almost every has.

Well that, or maybe Clarkson, like Irving, is just too damn woke for the rest of us regular humans.

LeBron James on If Cleveland Cavaliers Are Headed in the Right Direction: ‘You Don’t Know’