A Closer Look at the Atlanta Hawks Historical Outburst 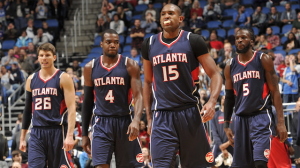 The Atlanta Hawks must’ve entered Monday night’s bout against the Sacramento Kings with something to prove.

Mike Budenholzer elected to rest a few starters in the Hawks’ previous game, which turned into a surprising-though-not-shocking 92-84 loss at the hands of the Philadelphia 76ers.

“A lot of our guys got to learn and grow,” Budenholzer said following the outing, per ESPN. “It wasn’t our best night, but sometimes you learn from those as much as your good nights.”

And man, did Atlanta ever learn quickly.

Atlanta became the 168th team to score 130 points during a regulation win since the year 2000, according to Basketball-Reference.com. An exclusive club, that is not.

However, the efficiency Budenholzer’s crew displayed was nothing short of sensational.

As seen above, the Hawks buried a franchise-record 20 triples. Just 13 squads—all since 2005—had ever reached that mark in a regulation contest.

What’s more, among those 14 teams, Atlanta’s 42 total assists was the highest total. Budenholzer has clearly brought his San Antonio Spurs roots to Philips Arena, giving his roster a ball-movement oriented focus. Only the Portland Trail Blazers had eclipsed the 40-assist, 20-triple barrier, toppling the 76ers in December of 2013 with 139 points, 41 dimes and 21 three-pointers.

But the Hawks’ overall performance is what will remain most impressive.

As a collective unit, Atlanta finished the blowout victory shooting 60.2 percent from the field with 53 made buckets, 55.6 percent beyond the arc with 20 threes, 42 assists and 13 turnovers.

The list of teams who have ever tallied at least 60 percent overall, 50-plus field goals, at least 55 percent from deep and 40-plus assists is small. According to Basketball-Reference.com, that number is a mere 20.

Additionally, the list of teams who have ever tallied 60 percent overall, 50-plus baskets, 55 percent from deep, 40-plus assists and 15 or fewer turnovers is unsurprisingly smaller—down to 11.

But the list of teams who have ever tallied 60 percent overall, 50-plus baskets, 55 percent from deep, 20-plus threes, 40-plus assists and 15 or fewer turnovers shrinks further.

Atlanta holds that honor by itself. The Hawks’ showing on Monday night was the single-most efficient all-around outburst in NBA history.

An exclusive club, that certainly is.