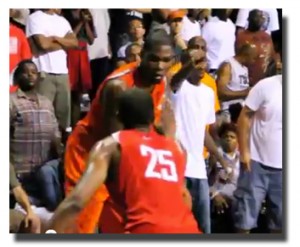 The trend of top flight NBAers making stops at summer leagues has no end in sight. It certainly isn’t unheard of, but it has been receiving much more attention this summer. The most recent encounter was by Kevin Durant as he invaded Rucker Park in Harlem.

Durant himself has been all over the summer league circuit this year, but this one was a bit different. Durant’s appearance came as a bit of a surprise. It wasn’t mentioned well in advance that he would be playing, but many in the New York area caught wind of the rumor and went to check it out. Sure enough, there was KD, playing for the DC Power against Sean Bell All-Stars in the Entertainer’s Basketball Classic. KD made 9 of 11 3s, including many in a row down the stretch, en route to the 99 – 93 win. That’s right, he scored two-thirds of his team’s points by himself. As you can image, the many people on hand enjoyed his performance. And if you think he was there just to have a good time, guess again. Check out how intense he was: