Fan Gets LeBron’s Face Tattooed On His Leg 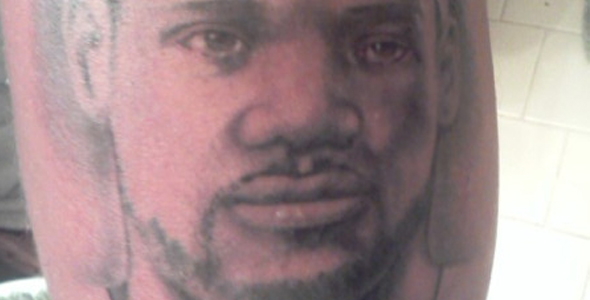 Fan is short for fanatic and it’s important not to lose sight of that. I’m all for painting a room the colors of your favorite team, or if you feel compelled to put up a life-sized Fathead portrayal of your favorite player (even though you’re a grown man) I guess I can understand that too if that’s your thing. But sometimes, I’m completely lost when it comes to fandom.

Recently, an apparently obsessed fan of LeBron James thought it would be a good idea to get LeBron’s face tattooed on his leg. What on Earth would compel someone to get a complete stranger permanently inked on his body? Because that’s what LeBron is: a stranger, and someone that he’ll probably never meet. And again, I find myself confused. Although LeBron has become America’s most hated public sports figure, certain things continue to transpire that force me to scratch my head. First was the revelation that his jersey sold more than anybody else’s in the NBA this past season, and now this.

I was hoping that the person who had this done was a 14 year-old who didn’t know any better and found someone to provide this service for him. I wouldn’t be as shocked because I would simply chalk it up to the kid being young, immature and unaware of what he was doing. But as it turns out, the guy who had this done is 22 years old. Sorry, but that’s ridiculous and inexplicable.

Apparently, this 22 year-old was tired of being berated on Twitter for this act and responded the following:

It’s on my leg and eventually it’ll blend in with other tattoos.

Naturally, LeBron saw a pic of the tattoo on Twitter and said:

Oh damn! Thats how u feel. I appreciate the love.

Then I’m sure LeBron proceeded to make sure all of the doors were locked in his home. Well, at least he didn’t get the tattoo on his butt, and aside from the fact that the pic looks nothing like LeBron, I guess it’s not that bad.