Cavs Varejao Out For Season With Ankle Injury 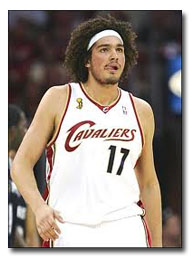 Just when you think things couldn’t get any worse for the Cleveland Cavaliers who are struggling big time right now having lost 19 of their last 20, one of the few bright spots on their roster goes down in practice with a severe ankle injury costing him the season….

Cavaliers center Anderson Varejao will likely miss the rest of the season because of a torn tendon in his right ankle.

Varejao got hurt during practice on Thursday, and was placed in a walking boot. He missed Friday’s game against Golden State before undergoing a second MRI in Phoenix. The Cavs said Sunday’s test revealed “a complete tear of the peroneus longus in the midfoot of the right ankle and foot.”

Losing Varejao is devastating news for the Cavs, who have dropped nine in a row and 19 of 20. He’s their leading rebounder, best interior defender and provides constant energy with his hustle.

Varejao may require surgery. He’s expected to return to Cleveland for further treatment.