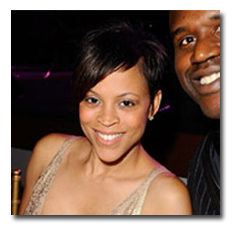 Courtesy of Sports by Brooks we got to hear an appearance by Shaquille O’Neal’s ex-wife Shaunie last week on the radio show Big Boy’s Neighborhood talk about how many NBA players cheat on their wives. Of all the players Shaunie knows personally the only one she can think of that she is sure hasn’t cheated on their wife is Grant Hill. I doubt it would surprise anyone that Grant Hill would be named as least likely to cheat, given the ‘good guy’ image he has had for years throughout his career. But what did surprise me was the joy with which Shaunie was outing people.

Does anyone else watching this think she should ‘mind her own business’? Looks to me like Shaunie is more than a little jaded. Oh, and anyone catch the eye roll at the end when she is asked about Dwyane Wade?: