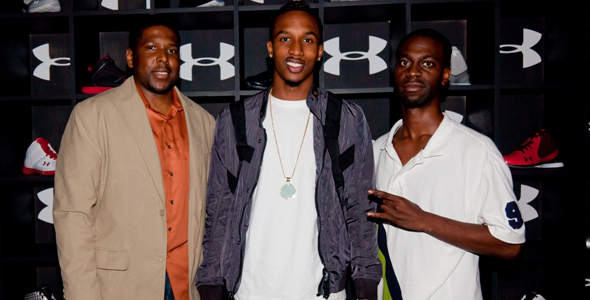 A week ago here on TheHoopDoctors.com, we gave you exclusive insider access to Brandon Jennings’ Under Armour sneaker launch in New York. Well, later on in the week, I had to the change to chop it up with Brandon while he was in LA for the Boost Mobile Elite 24, and literally on his way to do “Jim Rome is Burning.”

Brandon is the talk of the basketball / sneaker world of late because he is the first basketball player to endorse Under Armour and as you know, his Micro G Black Ice kicks become available in November. I had the chance to talk to Brandon about his new shoe, his Rookie season, and the inspiration behind his various hairstyles.

Kevin Burke: Hey, Brandon. What’s going on, man? Thanks for making yourself available for a few minutes. First off, congratulations on your first sneaker launch with Under Armour. I was actually at your sneaker launch in New York last week. How does it feel?

Brandon Jennings: Man, it feels good. It’s been a long time coming. I’ve been with Under Armour for two years and we’re finally here. We knew the day would come. I’m fortunate to have been surrounded by great people here at Under Armour who were able to make this all possible and it feels good that we’re here now. 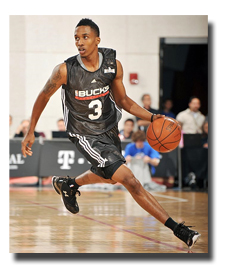 Kevin Burke: So talk to me about this shoe, your Micro G Black Ice , which will be available this November. I hear it’s tailored specifically to your lifestyle. How so? What exactly does that mean?

Brandon Jennings: Well, I told them that I wanted a shoe that I could rock with jeans. I wanted something that could get it done on the court, but could still be worn out at the same time.

Kevin Burke: (interjects) Hold on. So, you told them that wearing them with jeans with them was important to you too?

Brandon Jennings: Yeah. For me to be able to rock it with jeans, I wanted it to be a mid to low. You were at the sneaker launch, so maybe you saw the ones I had on. I thought they looked good with jeans. They can have a casual look to it too, which I like about them.

Kevin Burke: So, are you excited for November when your shoe is finally available?

Brandon Jennings: Definitely, I’m excited. I mean, this is my first one so how could I not be excited for it?

Kevin Burke: Brandon, transitioning to the court now to your team, the Milwaukee Bucks. Last season, you guys were 46-36 which was a 12 game improvement from the year before. You guys were a 6 seed in the East where you lost to the Hawks in a very competitive 7-game series. How satisfied were you with the season you guys had last year?

Brandon Jennings: I’m very proud of the year we had last year. We were able to make the playoffs in my rookie season and give the Hawks a scare in seven games. It was a good series. Unfortunately, we didn’t have the services of Andrew Bogut in the playoffs, but other guys stepped up big time. John Salmons stepped up and did his thing as well as a bunch of other guys. That experience is going to give us nothing but momentum heading into next season. It should make us that much better when next season rolls around.

Kevin Burke: So if Bogut was healthy, do you think you guys would have gotten by the Hawks?

Brandon Jennings: Hands down. No question. We definitely would have gotten by the Hawks if we had Andrew.

Kevin Burke: Have you talked to Andrew recently? How’s his rehab going?

Brandon Jennings: Yeah, I talked to him a couple of times this summer. His rehab is going well. He was in high spirits. He got his cast off which is a good thing. We’re looking forward to having him healthy and back on the court next year.

Kevin Burke: How about you, personally? How do you feel about your rookie campaign? Just under 16 points and 6 assists a game, a spot on the All-Rookie 1st team, a trip to the playoffs and a 55 point game. Were you happy with your performance?

Brandon Jennings: I feel like I had the best year of any Rookie last year, hands down. I realize that I didn’t win Rookie of the Year, but I still feel like I had the best year. I was the starting point guard for a team that made it to the playoffs and almost to the second round. I played in a lot of meaningful games that helped us reach the playoffs. I know an award like that is mainly centered around stats, but sometimes stats don’t always tell the full story, but I guess it’s tough to argue with 20, 5 and 5 (referring to Rookie of the Year, Tyreke Evans’ stats).

Kevin Burke: So, do you feel slighted in the Rookie of the Year voting?

Brandon Jennings: No, not really. I’m not going to say all that. But I feel very confident in the year I had.

Kevin Burke: Can you explain that 55 point game? I mean, you didn’t even score in the first quarter.

Brandon Jennings: Man, I don’t know what to say. Sometimes you just feel it. After the game I thought to myself, “wow, 55 with no points in the first quarter?” I guess you could say it was a good night.

Kevin Burke: Yeah, I would say so. Who was the toughest point guard to defend last year as a Rookie? 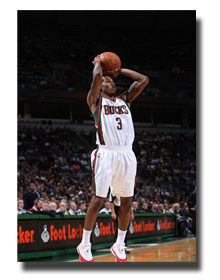 Kevin Burke: Why those two guys?

Brandon Jennings: With Deron, you can’t rip him. He’s always in the control with the basketball and he can score as well as pass. With Gilbert, you know Gilbert. When he gets going, you can’t touch him.

Kevin Burke: You’re the first basketball player to endorse Under Armour and you were also the first guy to go overseas to play ball rather than going to college. Now that you look back, any regrets?

Brandon Jennings: Absolutely not. No regrets. That was one of the best decisions I’ve ever made in my life. Playing overseas gave me that opportunity to play with grown men right out of high school, which helped my game mature quickly. It was professional basketball so that kind of experience was very valuable right out of high school.

Kevin Burke: Alright, what can we expect from the Bucks next year? Like I said before, 46 wins last year. Do you think you guys will get to 50?

Brandon Jennings: Yeah, 50 wins sound good. Another trip to the playoffs. Get to the second round this time. Win the Central division. You know, everybody was down on us last year and no one expected us to be as good as we were. So were going to surprise even more people next year.

Kevin Burke: Ok, before I let you go, because I know you’ve got Jim Rome coming up shortly. I have to know. What inspires your various hairstyles?  I mean, first we saw the Gumby, then it was the purple Mohawk. What’s behind the different looks?

Brandon Jennings: Haha, just trying to be different, you know.  Just trying to start a trend. But I think next year, I’ll just keep one style for the whole year. I’m not sure which one yet though. If you look at my shoe, it kind of looks like a Gumby, so hey, you never know.

Kevin Burke: Alright, I’ll be looking to see which one you go with. Brandon, thanks for the time and best of luck with your sneaker and with the Bucks next year.

Brandon Jennings: Thanks a lot. I appreciate it.