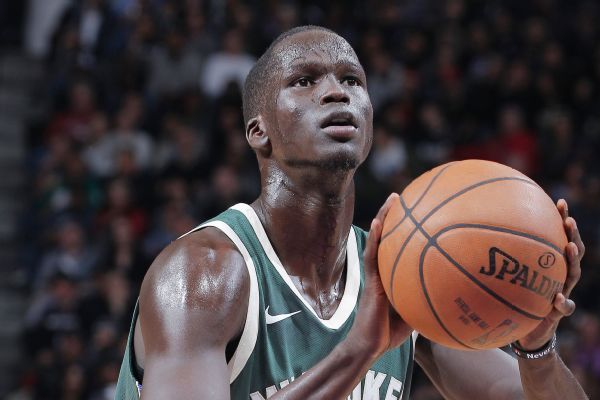 Thon Maker once again has the look and feel of someone trying to establish himself as the Milwaukee Bucks’ secret weapon. And, for the time being, his quest is panning out.

Well, thanks to an Instagram video posted by none other than Kevin Garnett, of course.

Maker mentioned the video, which Garnett made as part of his “Area 21” show on TNT, as one of the reasons behind his turnaround. Garnett’s video shows various clips of the future Hall of Famer getting pumped up during moments in his career.

“He posted it on his Instagram, and somebody showed it to me,” Maker said after Tuesday’s shootaround. “And then I watched it and I sent it back to him and told him how motivational it was and said I liked it. So then we started talking.”

Garnett’s faith in Maker is hardly surprising. He’s on record saying the 7’1″ stretch 5 has MVP potential. Maker’s renaissance of sorts, however, is a fairly big shocker. He fell out of favor with the Milwaukee Bucks following a tantalizing rookie season. His playing time increased, but his shooting percentages plunged. The idea that he would be the team’s best big (non-Giannis Antetokounmpo division) through the first round of the playoffs was never even kind of broached.

It has to be now. Maker has the best on-off differential on the Bucks; their performance improves by 32.5 points per 100 possessions with him compared to without him, according to NBA.com. They’ll need him to keep this up, even with the Celtics battling mass injuries, since John Henson is coping with issues of his own.

Oh, and if you’re wondering whether a Maker breakout complicates Jabari Parker’s future in Milwaukee as he enters restricted free agency this summer, the answer is absolutely, positively, without question…yes.