Thunder, Not Rockets, Could be Built to Challenge Warriors

Anou Enright July 3, 2017 Blogs No Comments on Thunder, Not Rockets, Could be Built to Challenge Warriors 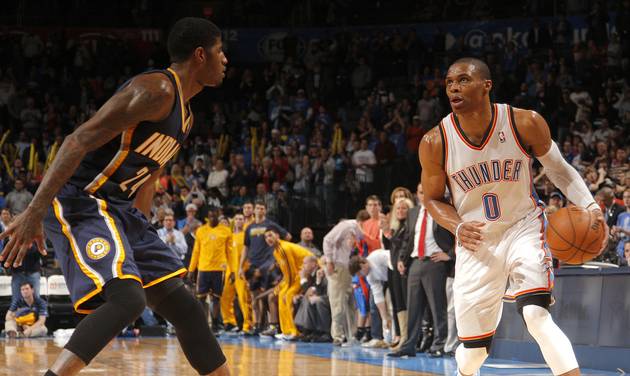 The 2017 NBA off-season madness has taken over the social media world and sports fans across the country yet again! (Easily the best off-season in sports). While some big time signings have already occurred like Jeff Teague to the T’Wolves and Blake Griffin re-signing with the Clippers, by far the two most earth shattering moves to occur happened before 12:00 on July 1: Chris Paul being traded to the Rockets and Paul George (shockingly) being traded to the Thunder.

In order to make the Chris Paul trade a reality, the Rockets had to deal Patrick Beverley, Lou Williams, Sam Dekker, Montrezl Harrell and a 1st Round Pick.

In order to land Paul George, the Thunder traded Victor Oladipo (and his four-year, $84 million contract) and Domantas Sabonis.

While some may think that the Rockets could be the biggest threat to the Warriors domination of the league and the western conference with two of the top players in the game and maybe the league’s two greatest point guards, James Harden and Chris Paul don’t fit.

James Harden and Chris Paul were both in the top eight in the NBA in possessions and touches last season, as both are ball dominant guards that have an entire offense run through them. This was one of the main issues behind the scenes with Paul and Blake Griffin in Los Angeles, as Griffin has a unique skill set and ability to pass and handle the ball and wanted to be able to direct more of the offense which wasn’t happening with Paul.

Paul, for being named an All-Defensive player yet again, is 32 now and doesn’t possess the quickness he once had or ability to shut down opposing guards on a nightly basis, and we all know James Harden can lose focus and give little effort at times on the defensive end and seems checked out in general as he was in Game 6 of the 2017 western conference semifinals against the Spurs.

Paul and Harden are both intelligent players but not a natural fit and may butt heads a lot next season.

Russell Westbrook, Paul George and the pieces around them may be exactly the kind of team to challenge the Warriors in 2017-18.

George’s skill set meshes perfectly around Westbrook’s as an elite scorer who can catch-and-shoot, come off screens, cut to the basket or create his own offense and be a secondary ball handler without having to be a distributor or table-setter, something he has never been. He gives the Thunder and Russell Westbrook a second elite scoring option that can take some of the stress off Westbrook to generate an insane proportion of the Thunder’s offense as he did in 2016-17.

The best way to compete with the Warriors is length, athleticism, plenty of scoring punch and guys who can guard multiple positions. The Thunder now have that with Westbrook, George, Steven Adams and Andre Roberson if they are able to re-sign him.

If the Thunder are able to fully commit and find the cap to sign a player like C.J. Miles and go over the cap to re-sign Andre Roberson, they may have just the line-up to give the Warriors a true challenge and match-up with the champs. A line-up of Westbrook, Miles, George, Roberson and Adams would have all of the length, athleticism, aggressiveness and scoring punch to be able to challenge the Warriors.

Who wouldn’t want to watch a maniacal Russell Westbrook look to dethrone his former running mate who deserted him for greener pastures? That would be NBA theater at its finest.

If the Warriors have any competition to return to the NBA Finals in 2018, it will come from Oklahoma City.