Stephen Curry is at the top of the basketball world right now. What is an elite NBA star without a sneaker with their name on it? Fortunately that is something the elder Splash Brother and reigning MVP has to worry about as Under Armour has this new colorway at the ready.

Officially called the Under Armour Curry Two ‘Floor General’, this colorway of Stephen Curry’s second signature basketball sneaker has a patriotic feel featuring a red upper with gold accents & branding, navy counter-coloring, and a white outsole. The “Floor General” nickname is on the tag inside of the tongue.

Even with higher production numbers than the first, the Curry Two has released in a handful of colorways since October with the earliest already sold out. Don’t make the mistake of waiting on a pair if you’re looking to pick up Under Armour’s latest signature basketball shoe for Stephen Curry.

The ‘Floor General’ Under Armour Curry Two is available NOW on the UA webstore for $130. 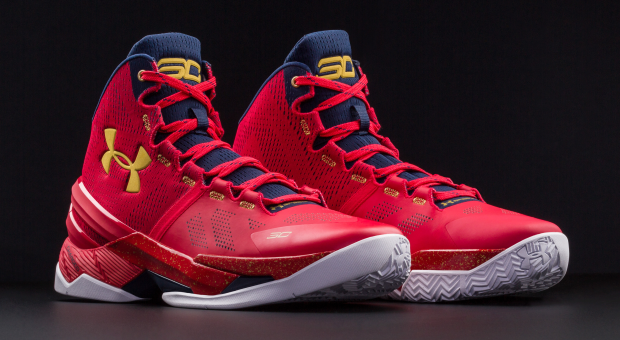