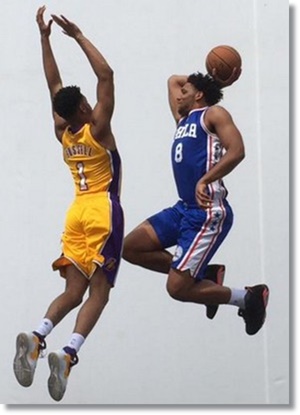 The 2015-2016 NBA rookie class looks like it will be sneaky good, with players like Jahlil Okafor (Philadelphia), Karl Anthony-Towns (Minnesota), D’Angelo Russell (LA Lakers), and Emmanuel Mudiay (Denver) probably battling it out all season for Rookie of the Year honors next June.

Recently all of this year’s rookie class got together for a photo shoot sponsored by Panini trading cards. It was the first chance to catch a glimpse of players like NCAA Wooden Award winner Frank Kaminsky in a Hornets uniform, Willie Cauley Stein in all purple representing the Sacramento Kings, and top International prospect Kristaps Porzingis donning Knickerbockers blue and orange.

Along with the usual comic relief, bloopers, and outtakes from these sort of events, the highly touted rookies were told to do their best impersonations of current and past NBA superstars like Lebron James, Kobe Bryant, Dirk Nowitzki, James Harden, and Allen Iverson…………and of course the cameras were rolling.

Tops on the list were D’Angelo Russell doing a spot on improv of new teammate Kobe Bryant that may draw some stink-eye looks from the “Mamba” in training camp, Jahlil Okafor channeling his inner Lebron James, and Trey Lyles doing one of the best best A.I. impersonations that doesn’t include the word “Practice.”

If you are a Kentucky Wildcats fan, you don’t want to miss Trey Lyle’s rather unflattering impersonation of his former coach John Calipari. Luckily for him, Coach Cal can no longer limit his playing time……………