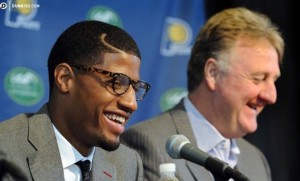 We’re approaching a year since Paul George’s horrific leg injury while playing for Team USA. Since he got injured playing for his country, it’s only right to see it all the way through and play for his country when he’s healthy enough to, right? Paul George seems to think and and apparently so does Larry Bird. Both are on board with George playing in the 2016 Olympics.

The Indiana Pacers forward affirmed Saturday that he wants to be on the U.S. basketball team playing in next summer’s Olympic Games at Rio de Janeiro.

“Of course,” he said. “I’ve had a dream of lifting that gold medal. That’s definitely motivation.”

“Larry, of all people, knows how important it is to play and represent for your country,” George said. “So regardless of the situation, I know he’s got my back on that one. And it’s a personal goal.

“I won’t let injury … injury is a part of the game. The last thing I’ll do is let that keep me from making the dream happen. No hard feelings towards none of the situation.”