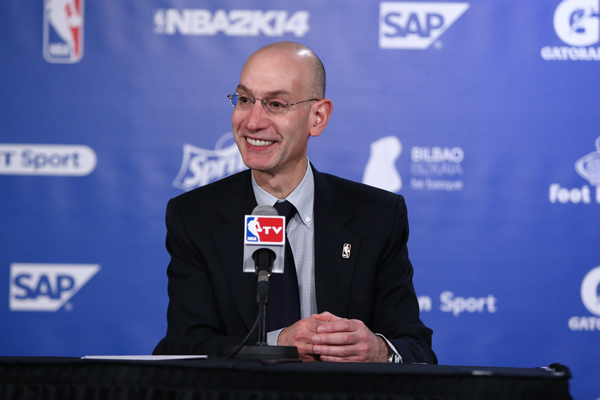 The NBA is not beyond losing money.

Even though the NBA put pen to paper on a nine-year, $24 billion dollar national TV deal in October, and even though that TV deal will culminate in consecutively massive salary-cap spikes in 2016 and 2017, and even though teams handed out max contracts in 2015 free agency like Oprah does cars, there are reportedly still a good number of teams losing money.

Adam Silver says a "significant amount of teams" are still losing money in the NBA because their expenses exceed revenue.

Good luck slinging that to players as you try to avoid a lockout in 2017.

Executive director of the National Basketball Players Association Michele Roberts has been pretty adamant about sticking it to the owners since assuming her post. She’s offered various sound bites that don’t reflect too favorably upon the Association’s 30 regimes, and she’s floated progressive, player-promoting ideas, such as the dismissal of max contracts. There’s no way she lets the company she represents hem and haw over the NBA potentially losing money. The players won’t buy it.

And it will be big-name players who won’t buy it, just so we’re clear. Chris Paul and LeBron James are the NBPA’s president and vice president, respectively, and their statuses speak to the emphasis players everywhere, stars or otherwise, are placing on the next labor negotiations.

Hell, even Kobe Bryant, who will presumably be enjoying retirement by 2017, will likely be found tweeting in support of the NBPA, just as he did when the league first inked that new television pact:

The obvious dichotomy between players and ownership is most likely going to make for one helluva scare a couple years from now. Whether or not that scare leads to a lockout, and whether or not that potential lockout rests heavily on the notion that certain teams are still losing money, remains to be seen.

Just enjoy actual basketball while you can. If the 2011 lockout taught us anything, it’s that.