Watch: PF Harry Giles Is The New #1 HS Player In The Nation

admin June 14, 2015 Allen Moll No Comments on Watch: PF Harry Giles Is The New #1 HS Player In The Nation 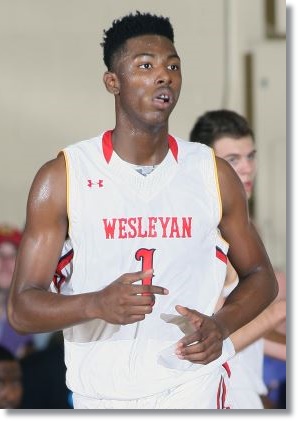 This past season, Australian native Ben Simmons was the unanimous choice as the top high school prospect in the nation for 2015, and as a result will be taking his talents to LSU to be a star freshman for the Tigers.

Now that Simmons, and fellow top tier 2015 recruits like Skal Labissiere(Kentucky), Brandon Ingram(Duke), and Jaylen Brown(Cal) are committed and are well on their way to being one-and-done candidates during next season, it’s time to take a look at this year’s senior high school class, and who some of the top players to watch are going forward.

Very few players have made their college choices for 2016, which means college coaches will be out in full force to watch elite prospects like Jason Tatum, Josh Jackson, Malik Monk, and Dennis Smith Jr.

But one player, 16 year old, power forward Harry Giles, has moved to the head of the class and is arguably the best NBA prospect in the high school ranks. The 6’10 and 230lb big man looks like a man amongst boys and has dominated recent Spring and Summer events like the City of Palms Classic and EYBL action.

The North Carolina native plays for Wesleyan Christian Academy in Winston-Salem, NC and also for the CP3 All Stars on the AAU circuit, recently leading CP3 to a 15-2 mark, winning Minneapolis Most Valuable Player, and helping CP3 win the EYBL Regular Season Championship.

He was a beast for CP3, averaging 20.6 points, 12.8 rebounds, 2.0 assists, 2.0 blocks and 1.2 steals during the session, including an eye-popping stat line in the Championship Game: 29 points, 20 rebounds, three assists, two blocks and two steals.

After tearing his ACL and MCL forcing him to miss his entire sophomore season, Giles has returned strong to nab the title of #1 ranked high school player in the 2016 Class per ESPN, drawing instant comparisons to former Michigan standout and former #1 NBA Draft pick Chris Webber.

As one could imagine, he’s currently being targeted by virtually every major Division I school, with the early favorites being Duke, Kansas, Kentucky, and North Carolina.