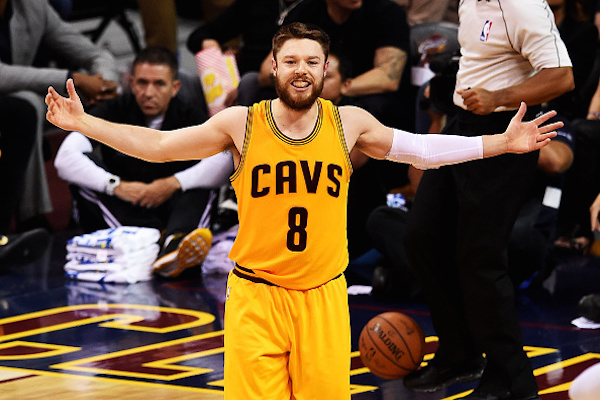 You might drive a more expensive car than Matthew Dellavedova.

Bask in that preeminent pittance for a second.

Okay, the second is over.

Dellavedova has taken the NBA Finals by storm. The Cleveland Cavaliers sophomore, who went undrafted in 2013, helped his team jump out to a 2-1 series lead by playing aggressive defense that was often perceived as dirty and inconsequential.

Two games later, both losses for the Cavaliers, Dellavedova’s value is still up for debate. He’s a playable player on a team that’s short on playable players. That’s where we’re at. He is not having his own Linsanity, nor does he project as a future star. He’s playing, sometimes good, sometimes not so good.

It’s nonetheless crazy to consider that he, an undrafted prospect who plays the NBA’s deepest position, is starting games in the Finals. Like, it’s surreal. Even after factoring in the absence of Kyrie Irving, it’s pretty damn crazy.

Brian Windhorst of ESPN.com really put Delly’s irrelevance into perspective in a profile he penned just a few days ago. It’s super informative and describes how close Delly came to being cut.

Now in the Finals, Dellavedova has morphed into the Cavs’ second-most important player to this point, which defies all kinds of realities. He’s been just as likely to make a clutch shot or free throw as he is to achieve a vital defensive stop or go crashing to the floor.

Dellavedova played so hard in Game 3 that he turned into one giant cramp after the game and had to go to the Cleveland Clinic to get treatment for dehydration. The former Mr. 61 is earning the lowest salary of any player in the Finals — $816,000 for the season. His teammates drive Lamborghinis, Ferraris and, in James’ case, a $60,000 Kia he gets paid millions to be seen in. Dellavedova drives a Mazda.

Consider that LeBron James brought home $20.6 million this year. That’s more than 25 times as much as Dellavedova. This isn’t meant to compare to the two; it’s just a holy crap moment.

But even if Delly was making bank—he’s owed a qualifying offer worth just over $1.1 million next season, one the Cavaliers will assuredly exercise—you could totally see him still driving a Mazda. Not just any Mazda either. Not one that’s decked out six ways toward next weekend. No, no, no, no, no. He would be rolling up in a used 2009 Mazda 3 base model, the only modifier in sight being the aluminum-foil spinners he had put on to add some shine to his whip.

That would be so Delly. He’s scrappy and gritty. He wore a hoodie on the playoff podium.

Y’all can keep your Ferraris, Lamborghinis and $60,000 Kias. Delly will ride in on a moped for all he cares.