New Orleans Pelicans Regain Eighth Seed, But Can They Hold it?

admin April 8, 2015 David Kenyon No Comments on New Orleans Pelicans Regain Eighth Seed, But Can They Hold it? 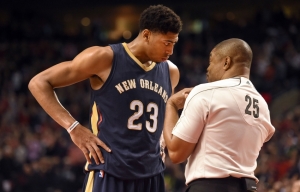 The battle between the New Orleans Pelicans and Oklahoma City Thunder for the eighth seed in the Western Conference has taken yet another turn.

New Orleans stunned the West-leading Golden State Warriors 103-100 on Tuesday night and improved to 42-35, while the San Antonio Spurs thrashed OKC 113-88 and dropped the Thunder to 42-36.

Consequently, the Pelicans assumed their position in the playoff picture for the first time since March 17, when the franchises were deadlocked at 37-30 records.

But things didn’t go so well for New Orleans during the following week.

The Pelicans lost to the Phoenix Suns, Warriors, Los Angeles Clippers and Houston Rockets. Oklahoma City, on the other hand, ripped off four consecutive wins.

Since then, however, OKC has posted a meager 1-6 record, and New Orleans has earned a victory in five of its last six outings—highlighted by Tuesday’s win over Golden State, though Pelicans star Anthony Davis wasn’t necessarily captivated by the triumph.

Nevertheless, even if Davis won’t admit the fact, the victory was immensely important because of what New Orleans must encounter to finish the 2014-15 regular season.

The Pelicans hold the tiebreaker over the Thunder, so Davis and Co.’s magic number is just four. But with the Memphis Grizzlies, Houston Rockets and San Antonio Spurs remaining on the docket, New Orleans needs another surprising win—or two—beyond potential victories against the Phoenix Suns and Minnesota Timberwolves.

Oklahoma City, on the other hand, has a remarkably more favorable slate, squaring off with the Sacramento Kings, Indiana Pacers, Portland Trail Blazers and T-Wolves. The Thunder have undoubtedly struggled lately, but their last four opponents were playoff-bound teams from the dominant West.

Answering which team has the edge moving forward requires careful interpretation. New Orleans has performed at a level where a postseason berth looks like it actually matters, while OKC has simply fought to tread water.

Granted, the Thunder certainly can overcome a stretch against mediocre and short-handed teams behind a few MVP-worthy performances from Russell Westbrook.

But the Pelicans are currently playing at a higher level. And after beating the best team in the league, New Orleans proved it can battle any roster, even without one of a key contributor in point guard Jrue Holiday.

One thing is for sure, though: The Pelicans don’t want the race for eighth to be decided on the final day, when they’ll challenge the San Antonio Spurs.

Just had a random fear that the #Pelicans' season ends w/ a playoff berth on the line by losing to the #Spurs' backups in the season finale.

As for Oklahoma City, Westbrook would face Minnesota, who has posted the second-worst record this season. That matchup on April 15 might be the the biggest advantage Scott Brooks’ crew holds.

Though New Orleans has a slight advantage overall, it cannot expect much assistance from the Thunder. Oklahoma City might not lose twice down the stretch.

The battle for the eighth seed doesn’t get much more exciting than this.