LeBron Joking That He Would Vote Kevin Love For MVP, Is Diabolical

admin April 16, 2015 Blogs No Comments on LeBron Joking That He Would Vote Kevin Love For MVP, Is Diabolical 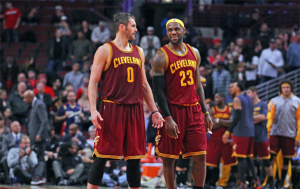 LeBron James has a sense of humor.

Hopefully Kevin Love does, too.

Much has been made about the relationship between these two. Most recently, Love said Russell Westbrook was having a better season than LeBron. Shortly thereafter, a report alleged that LeBron was growing frustrated with his new teammate.

Stop trying to find a way to FIT-OUT and just FIT-IN. Be apart of something special! Just my thoughts

Now, we have this, per the Northeast Ohio Media Group’s Chris Haynes:

LeBron James was asked who he would vote on for MVP and he said Kevin Love, with a smile.

Oh, snap. Now that’s how you use humor to diffuse manufactured tension—unless, of course, LeBron was merely peering into his crystal ball and making a one-game assessment. If that’s the case, this totally makes sense.

Love scored 19 points on 6-of-12 shooting in the first half during the Cleveland Cavaliers’ end-of-season overtime victory over the Washington Wizards Wednesday night. A one-night prediction would have totally flown here.

More seriously, LeBron must be pretty confident with the Cavaliers’ locker-room dynamic to be making quips like this. Or maybe he’s just super excited for the playoffs. Or maybe he just doesn’t give a damn what the media thinks. Or maybe he doesn’t care if he’s crossing a line with Love.

Or maybe, despite what Love himself previously said, these two are best friends playing an elaborate joke that’s being eaten up and treated as fact by a bunch of buffoons like us.

Better yet, who cares?

It doesn’t matter who’s saying this or that, what LeBron thinks of Love or vice versa. Irrespective of any good or bad vibes emanating out of Cleveland, we the people know who the Cavaliers’ real MVP is.