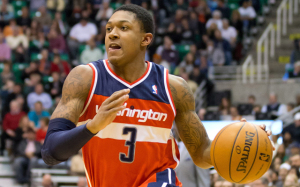 Someone in the capital of the United States needs to pick up the red phone and call for an emergency response unit, but it’s not President Barack Obama.

The Washington Wizards are a mess. And it’s time to panic.

Tuesday night, Washington managed to fall short of the Chicago Bulls—who were playing without Derrick Rose, Jimmy Butler and Taj Gibson—collapsing in a matchup where Aaron Brooks was 8-of-23 from the field.

What’s more, the Bulls connected on just nine of 29 three-point attempts and lost the turnover battle 16 to 11. The loss was a microcosm of the Wizards’ recent struggles, a representation of a tumultuous campaign.

I seriously cannot. So much more 'Whys' for this #Wizards loss but Otto Porter right here is epitome of #SoWizards https://t.co/khWYbdKyBz

Washington raced to a 29-13 record earlier year, presumably asserting itself as a contender in the conference. As of Jan. 19, the Wizards held the No. 2 spot in the East.

Since then, however, Randy Wittman’s crew has fallen in 14 of its last 19 outings, including a 3-12 mark since Jan. 27. Additionally, Washington has lost eight consecutive road contests, falling to the likes of the Detroit Pistons, Minnesota Timberwolves and Philadelphia 76ers.

Bradley Beal’s leg injury that forced him to miss eight games certainly affected the roster, but the Wizards were already free-falling when the shooting guard exited.

During the opening 42 games of the year, Washington shot 47.6 from the field, including a 38.9 mark from long distance. Following that day, the team has converted on abysmal 44.3 and 31.0, respectively.

The defense—excluding Otto Porter’s unbelievable lapse—has maintained its effectiveness. In the same time frame, the Wizards have surrendered a negligible field-goal percentage increase from 43.2 to 44.0, while the three-point clip allowed is essentially similar, inching from 35.0 to 35.1.

According to NBA.com, Washington’s offensive rating has plummeted from 104.2 to 98.2, the third-largest drop by any franchise.

A major problem is the Wizards’ lack of a consistent three-point threat, despite what the team holding the sixth-best percentage in the league might suggest. They hoist the fourth-fewest trifectas per night, severely limited by the lack of a stretch-4 to space the floor.

Wizards’ offense is the worst combination: clogged and predictable

Beal has drained 42.0 percent of his attempts from outside, but he’s a proven injury risk. In games without Beal on the floor, Washington has buried a downright terrible 29.7 percent of its triples, yet the front office has failed to add another deep threat as a security measure.

Plus, ball security is a glaring issue, since the Wizards’ average of 14.5 turnovers is the sixth-worst clip in the league. More specifically, All-Star point guard John Wall has ceded possession 3.8 times per night, also the sixth-highest mark.

Washington’s number of turnovers per tilt has remained constant throughout the year, so protecting the rock isn’t an out-of-nowhere shortcoming. However, when combined with a dramatic drop in offensive efficiency, the Wizards are tallying fewer points.

No matter how well their defense has operated, it’s not good enough to overcome the lack of scoring.

Then, of course, there’s Wittman. Among other headaches, his rotational decisions have sometimes been remarkable. And not in a good way.

Against the Golden State Warriors on Feb. 24, Wittman inexplicably declined to play Marcin Gortat during the fourth quarter. The center, who had recorded 16 points and 11 points, was upset after the 114-107 loss, per Jorge Castillo of The Washington Post—and for good reason.

Visibly perturbed after the game, Gortat said he expected to play in the fourth quarter. Asked if he was discouraged by Wittman’s decision to bench him, Gortat declined to respond.

Choices like that have led Wittman directly to the media hot seat, though his job is safe for now. J. Michael of CSN Washington recently reported that the organization has no plan to make any coaching changes.

The Wizards will qualify for the playoffs, all thanks to a horrid Eastern Conference. However, can they advance beyond the second round in the postseason with Wittman at the helm? Theoretically, it’s not impossible. Washington still has the same roster that started the 2014-15 campaign on fire.

But at this point, in conjunction with offensive problems Wittman has been unable to address effectively, it sure seems doubtful. The only thing left to do in Washington is panic.

Unless otherwise noted, stats are courtesy of Basketball-Reference.com and are accurate as of March 4.