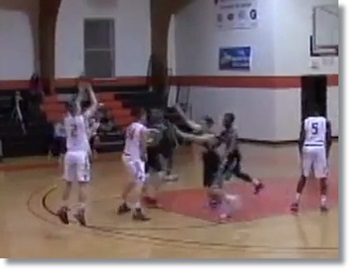 The basketball World just saw an impressive 3 point shooting performance by Stephen Curry on All Star weekend, as Curry scored an incredible 27 points in the Final round, to take home the 3 Point Shootout Saturday night.

Curry’s performance has furthered the debate as to if he will become the NBA’s best shooter of all time, surpassing even the exploits of Ray Allen and Reggie Miller.

There also are some elite high school players on the horizon that also have potential to be 3 point marksmen at any level like HS senior and Duke commit Luke Kennard, who recently passed Lebron James in Ohio state scoring.

Even more impressive than his point total has to be his career night from behind the arc, as he connected on an insane 18 of 24 three point shots, proving to be “In the Zone.”

Meredith stars alongside 4 fellow highly touted prospects at Hargrave, all committed to Division I schools, as the team has sprinted out to a 29-5 start to the season.  The school has also featured NBA stars like David West, Jordan Crawford, and Josh Howard in the past.