Russell Westbrook’s Torrid Streak Has No End in Sight 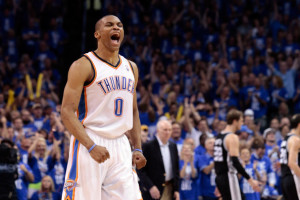 Love him or hate him, Russell Westbrook has dominated everything that’s stood in his way throughout February.

The Oklahoma City Thunder point guard has shredded opponents to the tune of 29.5 points, 8.2 rebounds and 10.1 assists per outing, spearheading the franchise to a 9-1 record over the last 24 days and thrusting himself into MVP discussions.

He’s garnered a pair of triple-doubles, five double-doubles, 48- and 45-point outbursts and a plus-126 clip. Perhaps Westbrook’s most impressive accomplishment, though, was a 17-assist performance against the Denver Nuggets on Feb. 22 without Kevin Durant on the floor.

My favorite of Westbrook's 17 assists tonight: the split, vision and lefty laser https://t.co/vVlrKSvWSD

OKC’s seven-game winning streak will eventually end, but the combination of Durant’s absence and a favorable upcoming schedule mean Westbrook’s stretch of elite individual contributions is primed to continue.

Durant is expected to return before the postseason, but the reigning MVP is again sidelined due to a lingering foot injury. Though Thunder are admittedly at their best when both superstars are on the court, Westbrook simply takes over when Durant cannot suit up.

According to NBA.com, Westbrook boasts a 110.4 offensive rating and stunning 42.2 percent usage rate when his All-Star teammate is sidelined. Considering those numbers rise from 107.6 and 30.6, respectively, the difference is certainly not a negligible one.

Oklahoma City’s next nine opponents include the 14-41 Los Angeles Lakers, 12-44 Philadelphia 76ers and 12-43 Minnesota Timberwolves. Against that trio, the explosive 6’3″ guard has averaged 27.5 points on 46.8 percent shooting from the field, adding 7.0 assists and 5.0 rebounds per showing.

Additionally, Westbrook has a new sidekick to help the Thunder’s offense pick apart the opposition. Minutes before the trade deadline arrived, OKC shipped disgruntled sixth man Reggie Jackson to the Detroit Pistons as part of a three-way trade, acquiring Enes Kanter from the Utah Jazz.

Through just three games, Westbrook has already dished 10 assists to the 6’11” power forward on just 48 passes, per NBA.com—a 20.8 percent clip. In comparison, Westbrook has a 12.0 assist rate to Steven Adams (34 in 284 passes) and trudged to a 8.5 percent mark with Kendrick Perkins (10 in 118) before he was shipped out of town.

With all that being said, the upcoming schedule gives Westbrook a more important motivation than personal glory.

The Thunder have slowly clawed their way back from a 3-12 opening to the 2014-15 campaign, riding Westbrook and Durant to a 29-13 run since Nov. 26. Subsequently, Oklahoma City has reached the eighth seed in the Western Conference and are a mere 2.5 games behind the San Antonio Spurs.

Positioning themselves in the playoff picture after such a brutal start is accomplishment in itself, yet Westbrook is poised to keep OKC pushing further up the standings.

Unless otherwise noted, stats are courtesy of Basketball-Reference.com and are accurate as of Feb. 25.