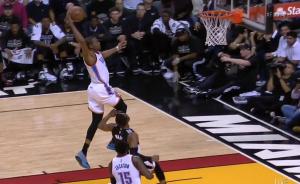 It was almost like a dunk competition between OKC’s dynamic duo—Russell Westbrook and Kevin Durant in their 94-86 victory over the Miami Heat last night. The win improved their record to 21-20, which also puts them a game over .500 for the first time this season.

However, in a scary turn during the game Durant seemed to jump out of the gym as he went for another ferocious slam against the Heat, which unexpectedly resulted to a hard fall making him hurt his elbow in the process.

Fortunately, Durant remained in the game and his elbow appeared to be alright. I think it’s fair to say: “Durant Dunks Too Hard For His Own Good.”