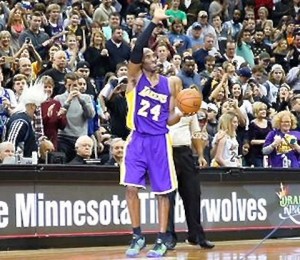 With a whopping 32,293 points, Kobe is only trailing Kareem Abdul-Jabbar (38,387) and Karl Malone (36,928). While it doesn’t seem likely Kobe will catch Kareem or Karl Malone, it is an amazing feat to score more points than MJ during the course of his career. Of course MJ scored that level in a lot less games, seasons, and shots taken, but none-the-less the feat is Hall of Fame worthy, and Kobe is certainly in the conversation of the Top 10 players of all-time in the NBA’s history.

Even Lebron James was quick to take to twitter to congratulate the achievement:

And Michael Jordan himself was respectful enough to send out a message through the AP:

Michael Jordan statement to the AP on Kobe Bryant passing him on scoring list: “I congratulate Kobe on reaching this milestone. ..

"…He's obviously a great player, with a strong work ethic and has an equally strong passion for the game of basketball…."

"…I've enjoyed watching his game evolve over the years, and I look forward to seeing what he accomplishes next.”