Warriors Bogut and Lee Are Healthy and Ready for Training Camp

admin September 22, 2014 Benjamin Felix Santos No Comments on Warriors Bogut and Lee Are Healthy and Ready for Training Camp 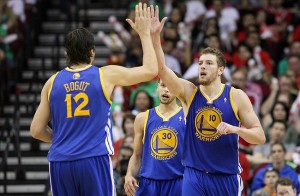 For the past few seasons, the Golden State Warriors have made it to the playoffs consecutively and impressively made their presence felt in the very tough Western Conference. But despite this achievement, they continue to fall short of expectations due to many different reasons such as injuries.

Their defensive anchor and center Andrew Bogut has been dealing with injuries almost throughout his entire stint with the team, plus also power forward David Lee can’t seem to stay healthy for an entire season. But now, both big men are in top shape and health for the upcoming training camp, according to Marc J. Spears of Yahoo! Sports.

Warriors @andrewbogut & @Dlee042 expected to be healthy & ready for camp. Bogut has been playing 5-on-5 at team facility in recent weeks.

Clearly, Warriors basketball has been revolving around the play of the so called ‘Splash Brothers’—Stephen Curry and Klay Thompson but together with Bogut and Lee healthy makes the team a top contender in the west. Both these players are relentless rebounders and respectable offensive threats down the middle and certainly many teams have had a tough time in dealing with them.

Another season will be coming up soon and the Golden State Warriors are going to be as hungry as ever to not just make some noise, but hopefully win it all.

Benjamin Felix Santos is currently a senior college student from the Philippines. An aspiring NBA writer, who bleeds the purple and gold. His love and passion for the game will never die.
You may find his other musings at the Lake Show Life.