Derrick Rose is OK With Playing Behind Kyrie Irving

Anou Enright September 2, 2014 Rumors No Comments on Derrick Rose is OK With Playing Behind Kyrie Irving 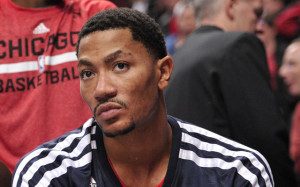 Prior to the FIBA World Cup beginning, it was reported that Kyrie Irving and Derrick Rose were going to alternate starts. However, Kyrie has become Coach K’s favorite at the PG spot, while Rose has been filling in. Whether Coach K detects rust on Rose or is just giving him a break, Derrick is fine with coming off the bench. That’s not a bad backup PG at all.

The NBA’s 2010-11 MVP also says he has no issues playing behind Kyrie Irving at the point after it appeared earlier in the summer that he would be a starter for Krzyzewski.

“We have a deep team,” Rose said. “And that’s what makes us so good.