admin July 29, 2014 Blogs No Comments on Wolves Like Thaddeus Young as K-Love Replacement 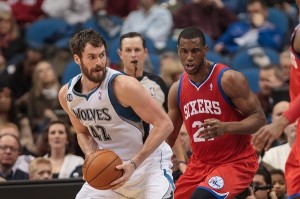 Staring down the barrel of Kevin Love’s departure, the Minnesota Timberwolves are eyeing Thaddeus Young as his potential replacement.

Marc Stein of ESPN.com has the juicy deets:

The Minnesota Timberwolves have expressed interest in Philadelphia 76ers power forward Thaddeus Young as a potential replacement for Kevin Love, according to sources close to the situation.

Sources told ESPN.com that the Wolves, while continuing to discuss trade proposals that would send Love to the Cleveland Cavaliers, have been exploring their options for acquiring Young from the Sixers, either through a separate transaction or as part of an expanded Love trade.

Whether Philadelphia proves willing to part with Young, though, remains to be seen.

Young has two years left on his contract, including a player option for the 2015-16 season, valued at a combined $19.3 million. Sixers general manager Sam Hinkie said in June that he anticipates Young starting next season in Philadelphia, but it’s believed that the club is willing to move Young if the assets acquired in return are sufficiently attractive.

Young as a replacement for Love is laughable. He is neither the playmaker nor the rebounder nor the scorer nor the shooter Love is. He’s the better defender, if that helps anyone sleep at night.

True, the Timberwolves will never replace Love, but their interest in Young as a separate trade is sort of weird. It’s going to take assets to acquire him—likely a first-round draft pick of some sort. Maybe the Philadelphia 76ers allow themselves to be used as some sort of a shitty contract dumping ground if it means landing a first-rounder, but if the Timberwolves are going to lose Love, their unequivocal playoff lifeline, they need to be hoarding draft picks rather than trading them away for semi-expensive wings who only begin to replace what they’re about to lose.

That’s not a knock on Young, mind you. He needs to become a better shooter in this day and age of stretch forwards, but he’s an active defender, super athletic with extensive knowledge of how to use that to his advantage and he’s one of the few reasons why you would even tune in to watch the deliberately shitting-the-bed Sixers.

Acquiring him in conjunction with, say, Andrew Wiggins, renders the Timberwolves a rebuilding team to watch. With Wiggins and Young, Mo Williams, Ricky Rubio, Gorgui Dieng, Zach Lavine and Nikola Pekovic, the Timberwolves would actually have a respectable core in place that doesn’t make fans want to find the nearest cliff, scream profanities toward the heavens and leap to their death.

Landing Young in a separate deal is what doesn’t make sense, since it would take additional assets. The Timberwolves would be better off accepting the Golden State Warriors’ package that’s built around David Lee and Harrison Barnes. They would kill two birds with one trade instead of dipping into their then-shallow pool of assets for a player like Young who doesn’t figure to be a successful cornerstone.

Then again, there’s really no telling what the Wolves are thinking at this point. Love, against certain logic, is still in Minnesota. Flip Saunders may fall in Love with Josh Smith and start talking blockbuster deals with the Detroit Pistons. Or, more likely, he could shave Love’s beard whilst he’s sleeping, claiming he bilked the superstar of his superpowers, hoping to trap him in Minnesota, where he will play out the rest of his days, cyclically missing the playoffs while spending his free time ice fishing with Pek.

Nothing is out of the question at this point.