Watch: Andrew Bynum Gets Booed In Return To Philly

admin November 11, 2013 Offbeat No Comments on Watch: Andrew Bynum Gets Booed In Return To Philly 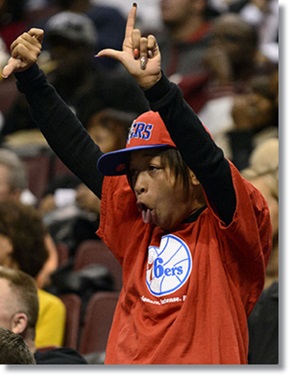 About this time last season, All Star and 2 time NBA Champion Andrew Bynum was still in the honeymoon stage with his new team, the Philadelphia 76ers.

He was being touted as the 2nd best big man in the Association, behind Dwight Howard of course, and was supposed to help bring the floundering Sixers franchise back to respectability, as he and budding first time All Star Jrue Holiday were to be the lynchpins of the reshaped roster that could would day challenge the Heat.

We all know what a disaster that turned out to be as Bynum and his achy knees didn’t play a single minute in Philly and Holiday was shipped to the Pelicans on draft night for Nerlens Noel.  Bynum eventually was not resigned by Philadelphia and was given a second chance by the Cleveland Cavaliers.

To everyone’s surprise, it was stunning rookie Michael Carter-Williams, that has helped revitalize the rebuilding Sixers, setting NBA records along the way and leading the Sixers to shocking early wins over Eastern Conference powers Miami and Chicago.

Friday, it was Philly’s chance to welcome Andrew Bynum back to the “City of Brotherly Love as only they can while the Sixers took on the Cleveland Cavaliers at home.

While Evan Turner’s 22 points and 10 boards helped the Sixers handily beat Cleveland 94-79, it was the loud raucous amount of boos that reigned down on a rather large shadowy frame of #21 in Cleveland maroon, better known as Andrew Bynum, that had newspapers and other media outlets abuzz Saturday morning…