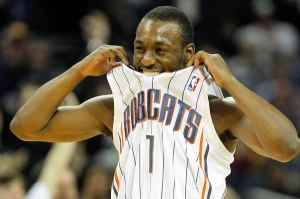 I’ve never considered Kemba Walker to be amongst the most emotional of NBA players. Sure, I’ve seen him cheer after a big shot or ankle-breaking crossover, but nothing that led me to believe he was the down-on-his-knees, sing-to-the-heavens, shed-a-tear-over-an-offseason-signing type player.

Alas, I was wrong. According to Rick Bonnell of the Charlotte Observer, Walker nearly burst into tears upon finding out the Charlotte Bobcats had signed Al Jefferson to a three-year, $40.5 million contract.

“I almost shed a tear when I saw this,” he replied.

If you’re perhaps wondering why Walker didn’t full-on cry his eyes out, it’s probably because he realized he still played for the Bobcats. If he was to turn on the waterworks over anything, it would’ve been about that.

On a more serious note, Bonnell wrote that Walker was a pivotal part of the recruiting process. He and Jefferson share an agent in Jeff Schwartz, so he was a major reason why Charlotte convinced Jefferson to take his talents Southeast from his then-current gig with the Utah Jazz.

My nonexistent sources also tell me that Jefferson had 40 million other reasons to join the train wreck in Charlotte. Alright, “train wreck” is a bit harsh. Let’s go with complete and utter confusion. That’s fits just as well, and seems less hurtful to boot. 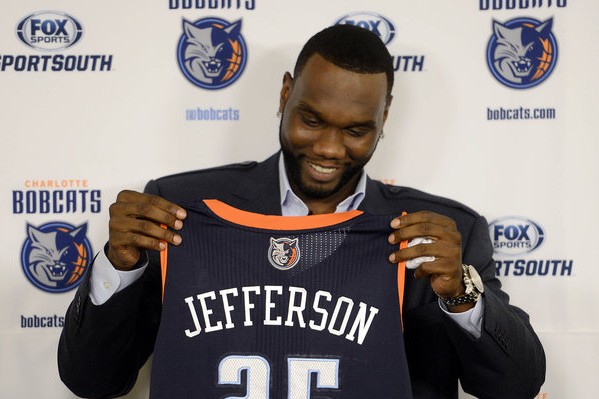 Photo via the Charlotte Observer.

The Bobcats already had Bismack Biyombo on the roster and were fresh off selecting Cody Zeller with No. 4 pick in the draft. Why in the hell would they throw so much money at Jefferson? Are they done with the supposed Kevin Garnett-in-training Biyombo? Do they already know they drafted an average to eventual draft bust in Zeller? Are Michael Beasley and Michael Jordan smoking from the same pipe?

I continue to be miffed by this signing. It makes no sense. Not next-to-no sense, but actually no sense. Aside from the personnel already in place, this is finally the year it seemed like it would pay to be the Bobcats. The 2014 NBA draft class is all-you-can-eat buffet loaded talent.

Though the lottery Gods haven’t been too kind to the ‘Cats as of late, they essentially (almost) gave away any shot they had at landing Andrew Wiggins. Or Jabari Parker. Or Julius Randle. Again I ask, WHY? Unless the Bobcats know something I don’t, I’m going to be asking myself that question all season long. Feel free to join in if you the mood strikes you.

Over the past few years it’s been taboo/impossible to say this, but the ‘Cats got better. Not good enough to make the playoffs, finish at or above .500, or even toil with 35 victories. But better than 21 wins for sure, at a time when 21 wins would seem ingenius.

They could still strike lottery gold, and their team could fare worse than advertised. That is all still possible. So is watching Jefferson and Walker combine for 40-plus points a night, rendering the Bobcats far from watchable, but leading them toward 28-30 wins while accomplishing absolutely nothing in the process.

Well, that’s not entirely true. Charlotte has succeeded in blowing my mind six ways towards three Sundays from now, to the point where I—like Kemba previously did, but for entirely different reasons—feel like crying out of sheer exasperation.