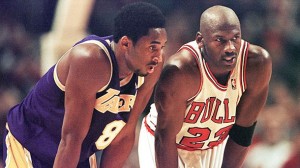 The closest thing we’ve seen to Michael Jordan has been Kobe Bryant. And I don’t mean from a basketball skillset standpoint, I mean from an emulation point of view. Ever since he entered the league in 1996, Kobe has walked, talked, pointed, chewed gum, shot free throws and fade-aways just like Mike. The similarities were astonishing as it’s clear Kobe studied Jordan while growing up.

Ironically, Phil Jackson had the opportunity to coach both of the aforementioned in their respective prime. While he was an active coach, Phil never seemed willing to answer questions where he was asked to compare the two. I understand his hesitancy because that wouldn’t benefit anyone aside from fans.

However, things have changed and Phil has decided to open up a bit. Jackson is releasing a memoir where he goes into detail about the two. These excerpts are courtesy of the LA Times and it sounds like Kobe falls short in many areas in comparison to Jordan, in Phil’s opinion.

“Michael was more charismatic and gregarious than Kobe. He loved hanging out with his teammates and security guards, playing cards, smoking cigars, and joking around,” Jackson said in the book, which was obtained in advance by The Times.

“Kobe is different. He was reserved as a teenager, in part because he was younger than the other players and hadn’t developed strong social skills in college. When Kobe first joined the Lakers, he avoided fraternizing with his teammates. But his inclination to keep to himself shifted as he grew older. Increasingly, Kobe put more energy into getting to know the other players, especially when the team was on the road.”

“No question, Michael was a tougher, more intimidating defender. He could break through virtually any screen and shut down almost any player with his intense, laser-focused style of defense,”

“Kobe has learned a lot from studying Michael’s tricks, and we often used him as our secret weapon on defense when we needed to turn the direction of a game. In general, Kobe tends to rely more heavily on his flexibility and craftiness, but he takes a lot of gambles on defense and sometimes pays the price.”

“Michael was more likely to break through his attackers with power and strength, while Kobe often tries to finesse his way through mass pileups,” Jackson wrote. “Michael was stronger, with bigger shoulders and a sturdier frame. He also had large hands that allowed him to control the ball better and make subtle fakes.

“Jordan was also more naturally inclined to let the game come to him and not overplay his hand, whereas Kobe tends to force the action, especially when the game isn’t going his way. When his shot is off, Kobe will pound away relentlessly until his luck turns. Michael, on the other hand, would shift his attention to defense or passing or setting screens to help the team win the game.”

So in every way imaginable, Phil seems to think Michael was better than Kobe. Both personally and professionally. That’s pretty telling. So is the fact that the above probably aren’t even the tip of the iceberg of what he will share.