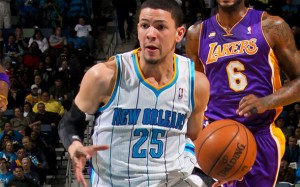 While a senior in high school, Austin Rivers got plenty of attention. That attention followed him to Duke for the one year he played under Coach K. But he has had an interesting transition to the pros this year. In fact, I’ve heard people suggest that (hindsight being 20/20), he should’ve stayed in school for another year.

Rivers will be out 4-6 weeks with a broken hand which makes that question even more interesting.

The Hornets announced that rookie guard Austin Rivers suffered a broken bone in his right hand during a 108-102 home loss to the Lakers on Wednesday.

Rivers fractured the fourth metacarpal bone in his right hand and will be sidelined four-to-six weeks with the injury. New Orleans’ final regular season game is on April 17, exactly six weeks from Wednesday, so it’s possible that the injury will end Rivers’ season. Should he return in four weeks, he will miss New Orleans’ next 12 games.