Back on November 15th, the Kentucky Wildcats bested the Kansas Jayhawks 75-65 in what was only Anthony Davis and Michael Kidd-Gilchrist’s 2nd game on the collegiate level.  Now after beating instate rivals Louisville 69-61 in Final Four action for the 2nd time this season, Kentucky will get the chance for the clean sweep of fellow powerhouse program Kansas in Monday’s 2012 NCAA National Championship Game. 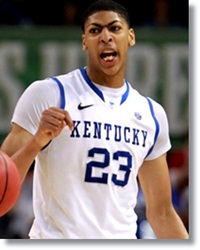 Fresh of being named the 2012 Wooden Award winner, given annually to the nation’s best player, freshman Anthony Davis showed off his immense all around talents to the World as the fabulous freshman became the first player since Danny Manning of Kansas in 1988 to amass 15+ points, 10+ rebounds, and 5+ blocks in a Final Four Game.

Davis’ 18 points, 14 rebounds, and 5 blocks were too much for the Cardinals to overcome as the Wildcats withstood a furious comeback in the final minutes before maintaining composure and securing an 8 point win, and a spot in the National Championship Game Monday evening.

Kentucky held a commanding 10 point lead early until arguably their 2nd best freshman Michael Kidd-Gilchrist was forced to sit nearly 14 minutes on the bench in foul trouble, as Louisville got the lead back to single digits by halftime.  Gilchrist responded well in the 2nd half by scoring several key buckets down the stretch and holding highlight reel Louiville PG Peyton Siva to only 11 points and 3 asssists.  Louisville’s Guorgi Dieng was obviously the Cardinals’ best player on the night, amassing 7 points, 12 rebounds, and 4 blocks, along with freshman Chan Behanan’s 10 points but no other Louisville player broke double figures in the game.

Kentucky senior Darius Miller came up big amid Gilchrist’s foul trouble, scoring 13 points as sophomore Doron Lamb added 10 points against Louisville’s #3 nationally ranked defense.  Although the game seemed much tighter than the 8 point victory for UK, many wondered just how potent the Wildcats could be Monday night if getting key contributions from everyone, as Gilchrist played in only 6 first half minutes, Terrence Jones had a subpar 6 points, and the team made only two 3 point shots? 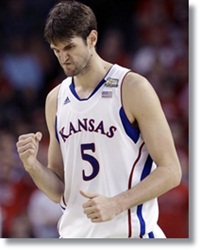 It appears that this year’s Jayhawks team just loves being the underdog as they parlayed some outstanding 2nd half defense on Buckeye star big man Jared Sullinger and several key late turnovers to secure a surprising 2 point victory over the favored Ohio State in Final Four action.

Jayhawks big man Jeff Withey, the Big 12 Conference’s top shot blocker during the regular season, set a Final Four record with 7 blocks, to go along with 8 rebounds to get the better of Sullinger, along with holding Buckeye leading scorer in the Tournament DeShaun Thomas to just 9 points, all helped Kansas secure a spot against Kentucky in the National Championship Game on Monday.

Although the Buckeyes held a commanding double-digit lead through most of the first half, Kansas outscored Ohio State 39-28 in the 2nd half, including a key 15-7 run late to earn the victory.  Kansas was led by All American forward Thomas Robinson, who overcame a benching early in the 1st half to tally 19 points and 8 rebounds, Travis Releford’s 15 points and 6 rebounds, Elijah Johnson’s 13 points and 10 rebounds, and senior Tyshawn Taylor’s 10 points and 9 assists.

Ohio State got 13 points and 11 rebounds from Sullinger, who clearly had problems in the post against the much bigger Withey.  Senior William Buford added 19 points and 8 rebounds in his final game as a Buckeye, as PG Aaron craft added 11 points, 3 assists, and 3 steals.  Surely all anyone will remember out of Craft was his ill fated attempt to intentionally miss a free throw and put-back in the final seconds that was ruled a lane violation.

Word is that Kentucky is already a big 6.5 point favorite.  Who ya got?