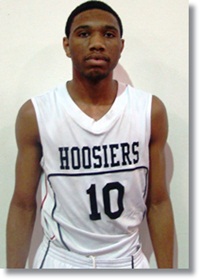 While in today’s modern age of recruiting it’s not all that uncommon for an elite level recruit to get a scholarship offer as early as their freshman season in high school, it is a bit drastic to receive an offer while still in middle school. That is unless your name is Eron Gordon.

You see, Eron is a 6‘2 guard, rising at an alarming rate in the 2016 Class, and……….oh by the way, he just happens to be the youngest brother of current New Orleans Hornet Eric Gordon.

The youngest Gordon has already proven to be a highlight reel, high flying prospect, as evidence of his outstanding performance in a 7th grade dunk contest last season.

He currently plays at Westlane Middle School in Indianapolis and plans at attending North Central HS, were his oldest brother Eric was once named Mr Basketball of Indiana in 2007. Middle brother Evan Gordon is currently sitting a season out as he recently transferred from Liberty University to Arizona State.

In addition to Indiana, Eron has already made an unofficial visit to Purdue, and has virtually every Big Ten school on his radar from Michigan State, Michigan, Ohio State, Wisconsin, as well as Xavier.

Check out Eron Gordon in action this season: