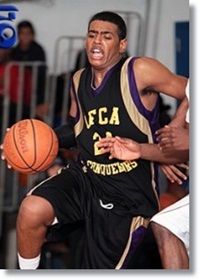 If you haven’t yet heard of Class of 2013‘s outstanding shooting guard Xavier Rathan Mayes, be one of the first to take notice. Hailing from Ontario, Canada, Mayes is one of the most sought after backcourt players in the junior class.

The 6’2 shooting guard currently plays his HS ball for West Virginia based hoops powerhouse Huntington Prep and reportedly has received major interest from a who’s who when it comes to high major Division I programs like Texas, Kentucky, Kansas, Arizona, Connecticut, and Pittsburgh.

While it has to be tough playing in the shadows of 2014’s top rated player Andrew Wiggins on the Huntington Prep roster, Mayes has more than held his own in establishing himself as an elite player in his own right.

While he’s known as a top notch shooter in his class, scouts may soon begin to take notice to his outstanding handles that he recently displayed at the 2012 John Lucas Camp for elite HS prospects.

If you can ignore the glare from Mayes bright pink sneakers, watch in the video as he makes his defender fall back as far as Lebron’s receding hairline, before staring him down, and sinking a game-winning jumper.