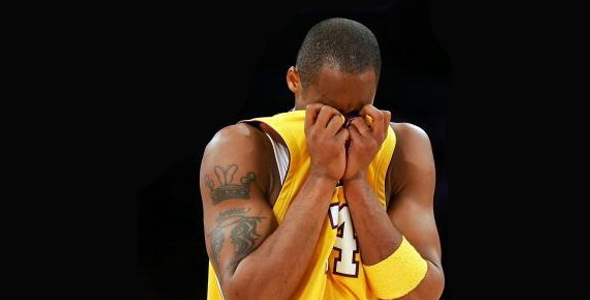 Kobe Bryant is arguably the most talented player in the league. He is the best closer and the guy who seems to routinely make tougher shots than anyone else.  He is also the guy who is hated more than anybody: by both fans and other players across the league. But the burning question is why?

The most casual basketball fan will tell you that he / she doesn’t like Kobe Bryant, and they usually don’t even have a good reason why. In speaking to both casual and knowledgeable fans who are neither Lakers nor Celtics fans, I found that the majority of them are rooting for the Celtics in this 2010 Finals. When I ask why, the answer is no doubt, “because I can’t stand Kobe.” I’m sure you know a few like that as well. Maybe you’re even one yourself.

I first thought that this anti-Kobe sentiment surfaced when he was accused of rape in 2004. I thought that the general public believed that he was guilty and thought negatively of him as a result. I soon realized that wasn’t the case. I think that he was largely acquitted of any wrongdoing in the court of public opinion and most felt that he was innocent. So that wasn’t it. Maybe some of it set in when, in the wake of his rape case, he made insinuations that then teammate, Shaquille O’Neal, was in fact unfaithful to his wife as well. I can definitely understand the beef there. But that’s not the answer, because he was hated even before that.

He’s from Philly and when the Lakers visit the Sixers, the venom from the fans seems extra fierce. His hometown even appears to dislike him. Fans have the right to boo if they want, but why do players around the league dislike him? They respect him as a player, but it doesn’t seem like most guys actually like him. Just think. How many fights has Kobe been in in his career? Chris Childs comes to mind. Doug Christie comes to mind. Ray Allen comes to mind. All of these guys swung at Kobe first. Can you image multiple players swinging at Michael Jordan first? No, because they had too much respect for him. Kobe has never had that level of respect around the league.

I probably should have stated this at the top, but I am not a Lakers fan or a Kobe apologist. Not even close. What I am though, is perplexed as to why there is this widespread feeling about this guy.

**Update** – Due to the flurry of emails and responses to this post Kevin has written a follow-up post “Why Does Everyone Hate Kobe Bryant – Part 2”. Thanks for reading, and participating in the discussion…