Allen Iverson is Planning a Comeback 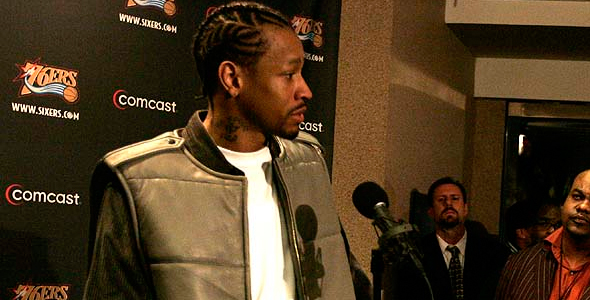 ‘Don’t call it a comeback, i’ve been here for years…’

There is just no quit in Allen Iverson. After what appeared to be a fizzling out of Iverson’s career last season when he left the Philadelphia 76ers indefinitely due to an illness with his daughter, most figured he would announce his retirement this summer.

Not so fast folks. If you’re an Iverson fan you’ll be happy to hear the promising statement from Iverson’s manager today announcing Allen’s intention to play in the NBA next season:

Gary Moore, Iverson’s personal manager, said that Iverson is planning a return to the NBA next season. Iverson returned to the Philadelphia 76ers in December and took a leave of absence in March because of family issues.

“Allen is working out and he’s getting himself prepared to make his return,” Moore said by phone Friday. “He absolutely will try and play next year.”

Iverson has not talked publicly since ending his second stint with the Sixers. Iverson’s wife, Tawanna, filed for divorce the same week he left Philadelphia. He posted messages on his Twitter account in March telling fans he expected to overcome the most recent obstacles in his life.

Iverson’s most recent Twitter updates were promotions for his basketball camp in July and his documentary “Deconstructing Allen Iverson.” Moore said the film could be released in the fall. {via}

There will likely be a lot of skeptics among the NBA franchise general managers regarding Iverson, given his recent history of quitting on teams and being a tough player to coach and play with. But when you consider the business side of things in the NBA, there is no denying that Allen Iverson is still a polarizing figure in sports and can still put butts in seats.

Also, coming off a playoff run for many teams who had trouble putting the ball in the basket when it counts in the tight, defensive style of post-season play, there may be some NBA teams that aren’t as quick to pass off the Iverson comeback attempt as entirely futile.

If Iverson can finally realize he is not the same volume shooting all-star he has been throughout his career, and realize he could be a valuable piece to a championship contending team provided he is willing to defer attention and scoring for the good of the ‘team’, i’m confident he would succeed. He just needs to be part of a team with strong leaders with whom he’s forced to respect.

For example, can you imagine a backcourt of Iverson and Wade in Miami? Especially if Miami is successful in luring a big name free agent a-la Chris Bosh this summer.

Either way, I hope some team takes a chance on Iverson this summer so we can ultimately find out what he has left in the tank. After all he has put in a hall of fame level career, and brought in fans in droves to NBA arenas over more than a decade when interest in the league was waning after the retirement of Michael Jordan. I think the NBA owes him that much.