Warriors-Thunder is the Series Everybody Really Wanted

Anou Enright May 16, 2016 Ryan Bawek No Comments on Warriors-Thunder is the Series Everybody Really Wanted 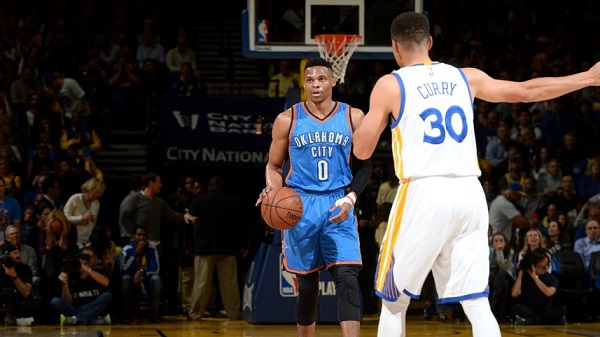 Game 1 of the 2016 Western Conference Finals tips off tonight in Oakland, as the two most talented and fast-paced teams in the NBA square off in an epic showdown for the right to play for an NBA championship.

The matchup is a slight surprise as almost everyone acknowledged that the Golden State Warriors and San Antonio Spurs were a level above the rest of the NBA throughout the regular season as they combined to go 147-24.

The Oklahoma City Thunder meanwhile were seen as a second-tier contender and had the potential to crash the party but would more than likely be doomed by their propensity for turning the ball over and losing 4th quarter leads.

The Thunder experienced a breakthrough in their 2nd round series with the Spurs and flexed their younger, more fast-twitched muscles to eliminate the Spurs in 6 games. Doing so set up the series that the basketball world wanted all along, the Warriors versus the Thunder.

If you watched the games closely though you would notice the Thunder had an opportunity to win the first two match ups before blowing a late lead and literally gave away the game in Oklahoma City in which they lost 121-118 in Oklahoma City when Steph Curry provided the play of the 2015-16 season.

Still get goosebumps over this shot by Curry vs the Thunder, so stoked for the serieshttps://t.co/WbcscYzcGz

As good as the Warriors-Spurs may have been, there is no way that series could have matched the level of talent, athleticism, speed and fast paced basketball that will be on display tonight.

That may be the most talent we have seen on one floor in a playoff series since the Celtics and Lakers squared off in the NBA Finals in the 1980s.

The matchup possibilities and game of chess that will take place throughout the series is incredible. How much will Curry guard Westbrook and vice versa? Will the Warriors put Green or Iguodala on Durant? Will the Thunder be able to go big with two of the trio of Adams, Ibaka and Kanter on the floor when the Warriors unveil the death lineup with Draymond at center or will the Thunder be forced to play Durant at the four for part of the series? Will Klay Thompson chase around Russell Westbrook and vice versa?

It will also be interesting to see if the Thunder try to run with the Warriors or if they opt for a slightly slower pace and more physical style of play.

Russell Westbrook is the one guard in the world who could potentially outplay Steph Curry in a series and if he does the Thunder may have a real chance to win the series.

Their is plenty of showmanship, angst and aggression abound in this series. The possibility of a Westbrook and Green shouting match, the altercation of an Adams and Green or the Bogut tangle that seems like a certainty by Game 5.

This is the series the fans and the league have wanted to see ever since that 38 foot buzzer beater hit the bottom of the net in Oklahoma City. This has the potential to be one of the greatest series we have seen in some time, containing all of the necessary ingredients for NBA playoff theater and drama at its best.

Buckle up and strap yourself to your couch NBA fans, these next few weeks is going to be a wild ride to the NBA Finals.