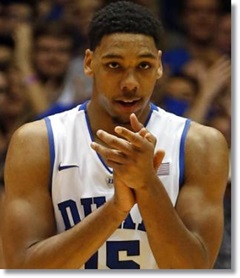 Last year at this time, everyone in the basketball universe was buzzing about high school phenom Andrew Wiggins as he made his collegiate debut with the Kansas Jayhawks.  Wiggins was so impressive that he went on to become the #1 pick in the 2014 NBA Draft.

One year later, Duke freshman big man Jahlil Okafor has generated the most hype entering the 2014-2015 NCAA season, as the former McDonald’s All American has been touted as the best center entering the college ranks since Tim Duncan at Wake Forest.

The 6’11 and 270lb frontcourt force has already earned numerous accolades like being named Preseason NCAA Player of the Year and was selected as the early frontrunner to be the top pick in the Draft next June.

But now it’s time to actually hit the hardwood running as opening night in college basketball is finally upon us.  And although Okafor and the Blue Devils blew out an overmatched Presbyterian Blue Hose squad by more than 60 points Friday night, one has to come away impressed by Okafor’s big time performance in game one.

This season, Coach K obviously will go back to the basics by feeding the rock inside to Okafor, in addition to getting back to lock down defense, as the Blue Hose found out opening night.

Okafor was an efficient 9/10 from the field for 19 points scored on a bevy of low post moves and jumpers, in the paint spins, and multiple rim rattling dunks, to go along with 6 boards, 4 assists, and 1 block.

Don’t look now but beginning with Okafor, the return of the big man may be on the horizon in the very near future.

Check out some offensive highlight’s for Duke freshman Jahlil Okafor in his first collegiate game….