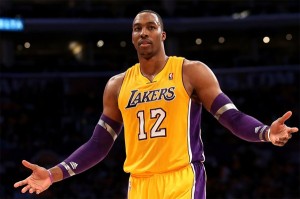 There’s a strict set of rules I like to keep when writing anything related to sports:

2)Don’t assume you know everything about an athlete

3)Stick to the facts

The second rule is perhaps the most important. Well, I am about to break that rule. Not just break it, i’m talking full on Bayless-banter, and it’s all because of one Dwight Howard.

We’ve heard about Howard recently ripping his old teammates, and maybe “ripping” is a bit too strong of a word. Nonetheless, it’s less of a key mark of Howard’s and ore of another straw on an exhausted camel’s back.

There are few NBA stars in recent memory that have handled being so relevant so very poorly. In Howard we have one of the most imposing talents in the history of the game. He has ’90s size with 21st century hops.

In his efforts to win a championship, he’s decided, instead of focusing a little more on just playing, to run his mouth as much as possible.

Here’s my problem with Dwight: he has a seemingly pathological need to be heard. Even more evident is he has this need to be taken seriously.

The fiasco he spearheaded in his waning days as a member of the Magic were exasperated by his lack of self realization. Howard didn’t quite seem to understand that he was being childish, playing with fans and media alike. I only assume he didn’t realize it because I feel as though he deserves the benefit of the doubt.

We had all already seen how poorly Howard handles the media to know that going to LA was going to involve some sort of bumbling and stumbling. I know a few sports writers and beat reporters in Orlando, and they don’t make a habit of storifying every single little thing a star athlete says. Mind you, they’ve resorted to it. Reporters have to eat too. But it’s a drastic contrast with the pressure cooker that his Los Angeles sports media.

Howard has a seemingly ever growing need to be taken seriously.

Kobe Bryant doesn’t buy it. The Magic don’t buy it. And as a fan, leaving a young team that’s been to the finals for yellow-clad dinosaurs leads to me to believe that I can’t buy it.