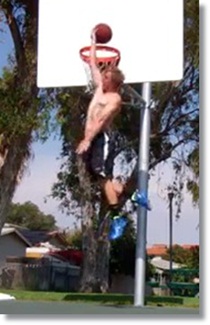 For a number of years now, Team Flight Brothers has provided us with endless hours of mind-blowing dunks, halftime showcases, and quite simply the best above the rim entertainment.  Highlight reel dunkers like T-Dub, Justin”Jus Fly” Darlington, and James “Flight” White have been shutting down worldwide dunk contests and lighting up youtube with clips of their dunking exploits for the past decade.

In the past we brought you footage of TFB’s Air Bama dunking on a 12 foot rim, Sir Isaac’s potential record breaking 55 inch vertical leap, and of course, T-Dub’s amazing 720 dunks.  More recently, Team Flight Brothers have been dipping into the international talent pool by showcasing arguably the “Best White Dunker in the World”, Russian born Shal.

But it’s another caucasian dunker, the 6’1 inch Daniel Hyde, who has been blowing up the internet with his high rise act, entertaining the masses with his reverse Eastbays and double pump reverse jams.

Hyde even recently channeled TFB alum T-Dub with his own amazing version of his patented 720 dunk, along with a 360 reverse Eastbay, and Vince Carter’s now famous elbow dunk…