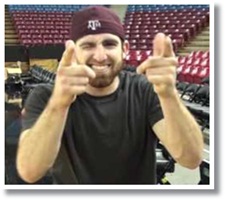 The man, the myth, the legend known as the self proclaimed “King of the Trick Shot” Dude Perfect has been on our radar at TheHoopDoctors.com for some time now as he continually keeps amazing us with his innate trick shot abilities with a basketball.

Even back when we first showed you his ‘09 Summer Camp Edition two Summers ago, we knew this guy had potential as a legendary trick shot artist.

Over the past few years Dude has been adding to his legacy by nailing many improbable long distance shots like these tosses earlier this year when he sinks shots from a moving plane, through a giant donut, and off of a high story building.

With so many competitors now on the horizon like David Kalb and that guy sank a hole-in-one with a basketball, all eying the crown as the World’s Greatest Trick Shot Artist, Dude is going back to his roots by attempting to one-up the shot that originally went viral and made him an internet star….nailing a shot from the 3rd deck at Texas A&M’s football field.

Of course, if you want to go one better than that, one must go to the NFL’s largest outdoor venue: Cowboys Stadium.