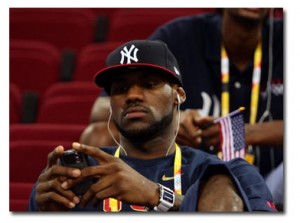 I understand there are a lot of Cleveland or New York fans that were dissapointed they didn’t land LeBron in free agency this summer, but c’mon. Do we really need to send the man racist tweets? That is just ridiculous. Heckling at games is one thing, but let the man prove himself on the court….

James posted a message on Tuesday on the social networking site inviting “haters” to get their “2 mins of fame and light!” by posting something negative about him. About three hours later, James forwarded a negative message from someone who used a racial slur so it could be viewed by all 900,000 of his followers.

James said Wednesday that he retweeted the one message in particular so people could see how athletes can be magnets for remarks like those, adding that “everybody thinks it is a bed of roses and it’s really not.”

Hundreds of other negative messages were addressed to James as well, although it’s unclear how many of those he actually viewed.