It takes one to know one, and yes this is no joke. Ron Artest is now an advocate…. 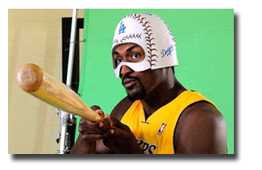 The two will head to Eastmont Intermediate School in Montebello next Thursday and talk to the students about the stigma of mental illness and encourage them to seek assistance. They hope to raise awareness and call for the passage of federal legislation HR 2531, which would establish mental health programs across the country.

What better spokesman could there be for mental health than Ron Artest, who publicly thanked his therapist after the Lakers won the NBA championship last June.

For more, plus photos of Ron and mental health check out the OC Register