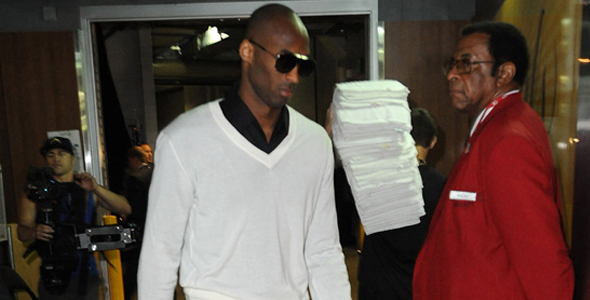 First of all, if you haven’t checked out “Why Does Everybody Hate Kobe Bryant?” , the original installment, please do that now so this post will make sense for you. Now, on with my thoughts.

If there was any doubt that Kobe Bryant is the most polarizing player in the league today, that question has been put the bed. I always knew that the words Kobe and Bryant will always elicit a response, but I guess I didn’t realize the full extent. People either love him, or hate his guts. Nobody is on the fence when it comes to Kobe. I was somewhat surprised at the number of people who took the time to chime in and give their take. As I write this, more than 80 people felt compelled enough to either comment on their feelings about Kobe, or to tell someone else that they’re crazy. You could really feel the emotion.  Based on the sheer number of responses and emotion involved, I felt that it definitely warranted a sequel so that we can come to a conclusion.

“Why Does Everybody Hate Kobe Bryant” isn’t a rhetorical question. I honestly want to know the answer, because whether or not people would like to acknowledge it, I don’t think it’s a stretch to say that, by and large, he isn’t that liked. In looking through every response, here are the main reasons that were repeated:

He’s cocky, a rapist (allegedly), self absorbed, he talks alot of trash on the court, he’s lucky because he always had a great team, he gets too much attention from the media which causes people to hate him, he thinks he’s Jordan, and he has questionable character. There were others, but that’s pretty much what was repeated throughout, but his cockiness, him being self absorbed and his questionable character were most common.

I found it ironic that there weren’t that many reasons to hate him based on anything he does on the court. They were mainly centered around the type of person he is. I still think it’s strange because there have been countless players in NBA history who were cocky, self absorbed and had questionable character, but not many have come close to receiving the type of hate Kobe has gotten. Based on that fact, I heard one response that I think may be the answer as to why he is so hated: He doesn’t seem to react to criticism as most players do, and I think that subconsciously annoys people above all.