admin June 29, 2010 Blogs, Dr. Anklesnap No Comments on Brian Shaw Set to Sign On As Cavaliers Next Head Coach 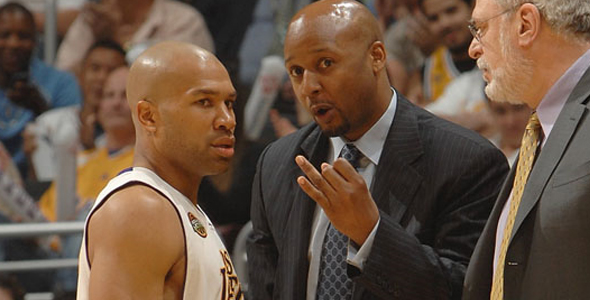 After Tom Izzo declined the offer for the Cleveland Cavaliers head coaching position in favor of staying with Michigan State, we heard talk about ongoing discussions between the Cavaliers and a few candidates which included former Lakers player and current assistant Brian Shaw, as well as former Lakers player and Hornets coach Byron Scott. Well NBA Fanhouse sources have told them that talks have stalled with Byron Scott and that the Cavaliers are close to signing Brian Shaw as their next head coach regardless of how things go in free agency with Lebron James.

NBA Fanhouse had this on their source:

A source told FanHouse the Lakers assistant is close to finalizing a deal to join the Cavaliers just one day before James’ much-anticipated free agency begins. Shaw was a finalist with former New Orleans and New Jersey coach Byron Scott after Michigan State coach Tom Izzo declined the team’s offer earlier this month.

A source close to Scott said discussions for him to become the coach have not moved forward, a further indication that Shaw is the choice.

We hear that although Shaw became quite close with Laker franchise man Kobe Bryant, while playing and coaching in LA, he has also remained close with Shaquille O’Neal since he left town. Shaq and Shaw were teammates on the Lakers championship teams from 2000-02. Shaw was also teammates with Shaq back in ’95 on the Orlando Magic NBA Finals run before ultimately losing to the Houston Rockets.

If Brian Shaw is hired as the Cavs head coach, are we likely to see Shaq back in a Cavaliers uniform next season